*THIS IS NOT FINANCIAL ADVICE*

This isn't a DD, and it has little to do with the current stock price and the potential for a short or gamma squeeze. If you're new to this ticker and want to catch up on recent sentiment history, please check out the existing recent DD's. Notably:

DD's and discussions have mostly been limited to potential for a short or gamma squeeze. Here is what the Ortex data looks like from 9/13:

Discussion about the company background, product, staff and leadership has been absent. I am not an pro or self-proclaimed expert so I normally would not bother to attempt such a write up. That said, I found several intriguing things with just a few minutes of googling, and hardly anyone talking about them. With retail seemingly starting to pay attention to this one, I figured I better toss this info out there to spur discussion, additional research, and perhaps counterpoints.

They unexpectedly announced earnings today in AH, leading to a steep drop that fully recovered before AH ended. Stock finished the day up 20.27% and shows as up 5.06% to finish off AH. The reported quarterly revenue (6.1 million) was notably disappointing, but investors seemed to get over that pretty quickly. Is this due to the squeeze? Who knows. I decided to check out the leadership team and company website, which is when I started to have a special feeling about this company. I have read DD for many stocks suggesting a squeeze is imminent, but what really sets IRNT apart from the other stocks often mentioned is the background of their leadership team (and board of directors). Read this public information below and tell me these guys don't sound like winners, like guys who "know something". So what if they only put up 40 to 50 million in revenue this year. I think their work on this started long before 2014, and with the backgrounds of this team in mind, I don't know who in their right mind would bet against them in the long run. So many previous direct ties to government, specifically intelligence agencies. Lots of suggestions of collaboration/synergy with the feds in regards to business offerings. Imagine trying to come from the outside and compete with these guys in this industry! This, combined with the future prospects for the cyber security industry has me fulling pretty bullish long term on this company. I think a lot of retail investors still have yet to find out what this company actually does. 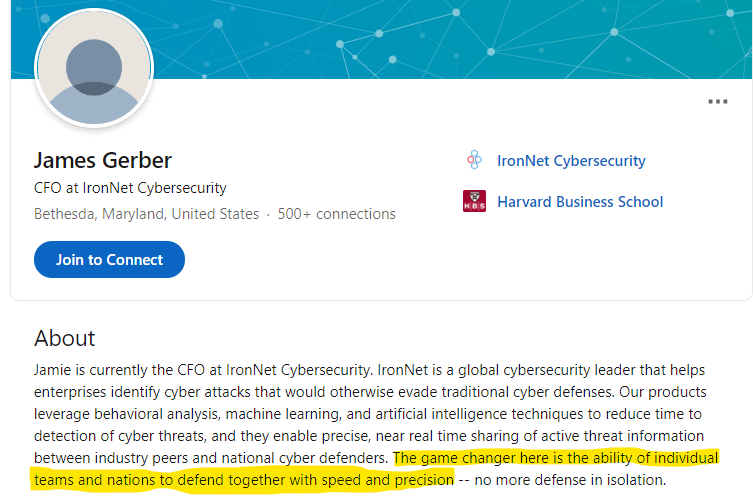 Mike McConnell - Board of Directors

Mike Rogers - Board of Directors

Jan Tighe - Board of Directors

Jack Keane - Board of Directors

The industry as a whole looks promising, obviously:

Global spending on cyber security is unsurprisingly projected to increase from 114 billion in 2018 to 170 billion in 2022. (Cyber Security Ventures)

The year 2020 holds the record for the most cyberattacks and breaches worldwide ever. According to one survey, nearly 80% of senior IT employees and security leaders believe their companies lack sufficient protection against cyberattacks despite increased IT security investments. The average time to identify and contain a breach now stands around 80 days, and cybercrime is projected to cost the world $10.5 trillion annually by 2025. (Venture Beat)

On Monday, the United States again accused China of cyberattacks. But these attacks were highly aggressive, and they reveal that China has transformed into a far more sophisticated and mature digital adversary than the one that flummoxed U.S. officials a decade ago.

The Biden administration’s indictment for the cyberattacks, along with interviews with dozens of current and former American officials, shows that China has reorganized its hacking operations in the intervening years. While it once conducted relatively unsophisticated hacks of foreign companies, think tanks and government agencies, China is now perpetrating stealthy, decentralized digital assaults of American companies and interests around the world. (NYT)

Thoughts? What did I miss? Why should I not buy and hold this stock for 10-30 years?