$T was picked up on my daily scan for an increasing gamma-squeeze situation. Looking into it suggests that $T both looisng its support at its current floor of $27, as well as developing an increasing gamma squeeze. I will also make the argument that $T is in a unique situation for a stock.

To start, a quick over-view of the metric that I use, VoEx:

Now off to $T. Looking at VoEx:

Here we see that VoEx-daily (magenta) has dived off the cliff today with the price depreciation from yesterday. Historically this is met with continued price decline, despite VoEx-trend (tan) being within the stability zone. Ordinarily, there would be reasonable suspicion that $T would experience a short-lived price dip without longer-term bullish sentiment given these conditions, but with the developing gamma squeeze, I think the waters get muddied a little.

Looking at past performance, we see that $T had a very established floor at $27. This can be seen with the expected price-range graph that shows the price (black line) of a stock as compared to the market's expectations of the price (blue channel), with $27 indicated by the blue bar:

Ordinarily these types of stocks are confined towards or at a certain price point by the share-obligations of the options at that strike, or by the effects of delta, vanna, and gamma, etc. that shift delta-hedging behavior. For instance, I will show below that the majority of puts on $T are surprisingly dealer long which means they were sold by retail investors and provide sufficient purchasing behavior as volatilty rises and the price approaches $27 which helps explain the "floor" at $27.

Why am I bringing up volatilty? Here is the expected price range graph with volatiltiy on the bottom: 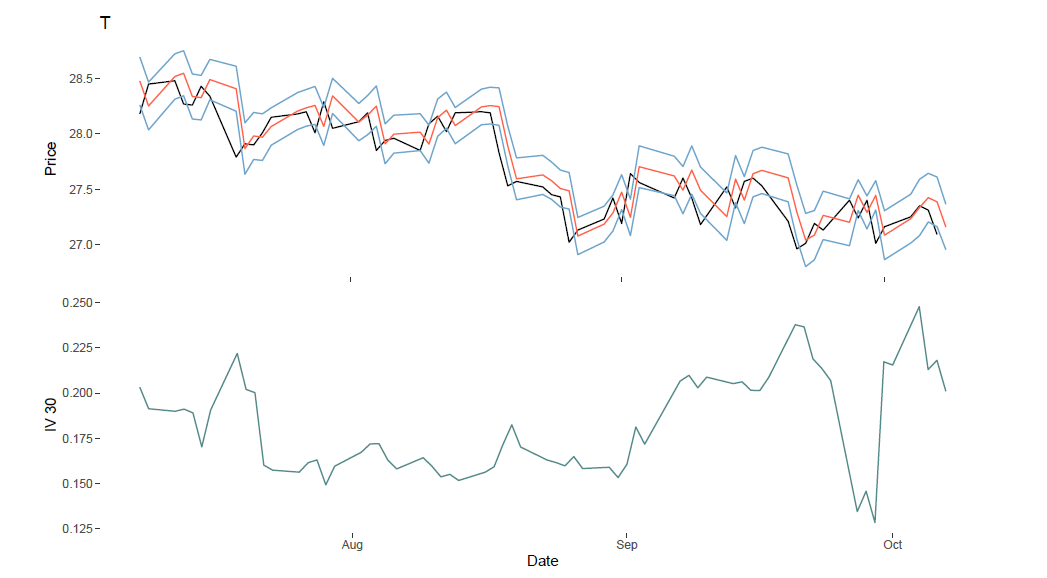 Its interesting that as the price settled towards $27, volatilty began to rise. In fact, since just before September to the recent peak, volatilty seems to have risen 108%. Well - that's interesting, no? In fact, as the price moves closer to $27, the effects of volatilty on the hedging behavior increases!

Typically on a stock the majority of OTM calls are dealer long (sold by retail investors), and the puts are dealer short (purchased by retail investors). This situation causes increasingly positive delta as the price approaches the strike value, and negative delta as it moves away - but we will see below that $T is behaving opposite to the norms and conventions of classical end-stage capitalism.

So for now, keep two things in mind:

So let's look at the current distribution of opitons on $T: 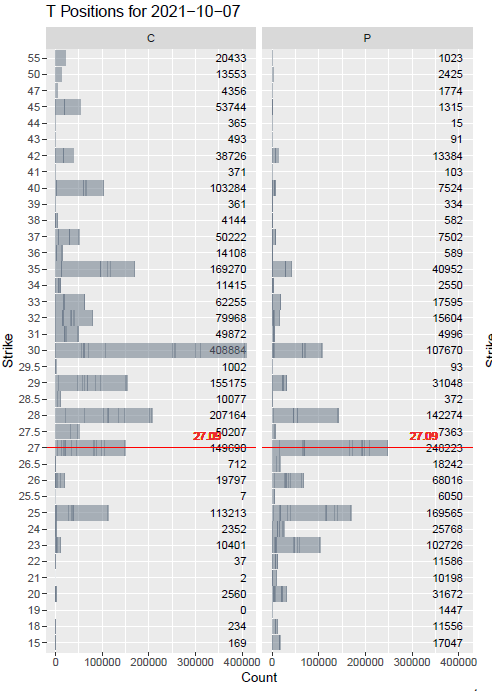 Going back a month or so, let's focus on the puts at $27 along with $T's corresponding delta values:

What do you notice?

(Nerd note: I actually really like this table. It has a ton of fun information).

The first thing should be the massive influx of dealer short delta. This is a relatively large gamma-squeeze that was produced over-night seemingly on $T.

The second thing(s) worth noting is:

This combination of events only occurs with the infamous dealer long put! (and to a lesser extent: dealer short calls).

(Nerd note 1.5: Why do dealer long (OTM) puts cause selling as IV increases? Consider delta to be the probabilty of an option expiring ITM. Now suppose that this probability is calculated by way of the normal distribution curve (actually don't suppose, it is). So imagine a distribution curve centered with the x-axis as the prices ranging from the center of the curve at the current stock's price.

If you widen the area under the curve, the range of values (x-axis) that is covered by the curve increase. The curve becomes flattened at the top, and each individual x-value that was previously covered by the curve has a lower probability, but now there are new values included in the curve that have non-zero probabilities now! The wealth has been shared. Told you this was a nerd note.

Now consider that the curve becomes more narrow: the area under the curve covers less of the x-axis - the probability curve shows less likely movements away from zero. So there is greater probability of a zero-price movement as compared to before.

Now what controls how the probability curve is narrow or wide? Volatilty!

So if delta is the measure of the probability of an OTM option becoming ITM (and conversely, an ITM option becoming OTM), then if volatility rises on an OTM short delta (like a long put), the curve widens. Since the curve has widened, more of the x-axis is covered by the curve. Since the strike price for the option is now covered by the curve, the probailty of the put becoming ITM increases! Thus delta trends towards -1. As delta trends towards -1, if you are delta hedging you have to offset that delta with additional short-delta from shares, ie: you have to sell!)

(Nerd note 2: sometimes it can be hard to discern the role of IV and its effects of delta. But consider that for any option, as it approaches its strike price its delta will approach +/- 1, so on price depreciation with dealer long puts, you would expect delta to approach -1 and on dealer short puts, to approach +1. In all cases this doesn't seem to be the case. As the price depreciations towards $27, short delta is added, and as it moves away from $27, long delta is added!

Additionally, with IV currently sitting at 20, the delta values of the next nearest chunk of options (calls at $30), practically have a near-zero delta regardless of the minor fluctuations in price or IV around $27. Delta is being almost exclusively driven by the puts (dealer long puts, that is)!)

So today was (October 7th), $T was hit with a double whammy:

This is the driving force behind $T developing a 1 million share negative delta. In fact, we can examine the effects of price and volatilty with the hedging matrix that shows the amount of shares that have to be purchased (+) or sold (-) per point move in price and IV:

And just as expected! When the price drops and IV increases: lots of selling!

So $T is sitting in a precarious position where continued price depreciation with decreasing volatilty (which is currently sitting much higher than average) will be met with decent selling amounts. For instance, using today's matrix, if we calculate the amount of shares that had to be moved to hedge from the 6th, to the 7th we would come up with approximately 3.4 million shares that had to be sold.

So in summary: although VoEx-trend (tan) is in the stable zone, the recent dip in VoEx-daily (magenta) had me investigate $T and found it to be in an unusual position of having large quantities of dealer long puts in an environment of rising IV, which explained the recent price-action of $T.

Yet, IV is now recending and the puts are diminishing, so there is concernt that the $27 floor is eroding away with the next "floor" placed at $25.

(Last nerd note: guess what the predominant type of put was market-wide in Janurary of 2020?)