How does GameStop justify it's valuation of over $10B in market cap, while threats to it's core business accelerate? Console manufacturers are moving to digital delivery instead of physical games (38% of GME revenue). Meanwhile physical consoles, which make up over 49% of GME revenue, is only sold on 4 year cycles--and sold at all competing retailers.

Create a GME coin that consoles can mine, while powered on and connected to the internet. Users then spend GME Coins online to buy games, in-game items, and cosmetics--competing with Free to Play (F2P) market while supporting game publishers. GME sells the mining processing power to host games and CDNs, turning GME into a technology company.

You are tasked with drafting the turnaround strategy for GameStop, an online and brick-and-mortar retail store specializing in console games and accessories. The chairman for the board, Ryan Cohen, began his turnaround of the business in 2020, aiming to make GameStop the “Amazon of Gaming”. Recent “Meme Stock” speculation of the company's stock has driven the price of shares from $15 to as high as $483 in less than a year. As of September 20, 2021 the stock now trades at $189 per share.

GameStop has full alignment with Microsoft (Xbox) and Sony (Playstation) to build the “next generation” of gaming. In the wake of the Epic vs. Apple lawsuit, Microsoft and Sony have determined that retailers such as GameStop are necessary and, for fear of antitrust regulations, have committed to a strong collaboration with GameStop. You have counterparts at both companies working to launch this new product offering. Ryan Cohen is interested in a serious turnaround strategy, to help justify the recent $10 Billion Dollar valuation by share price.

Challenges to the GameStop business model 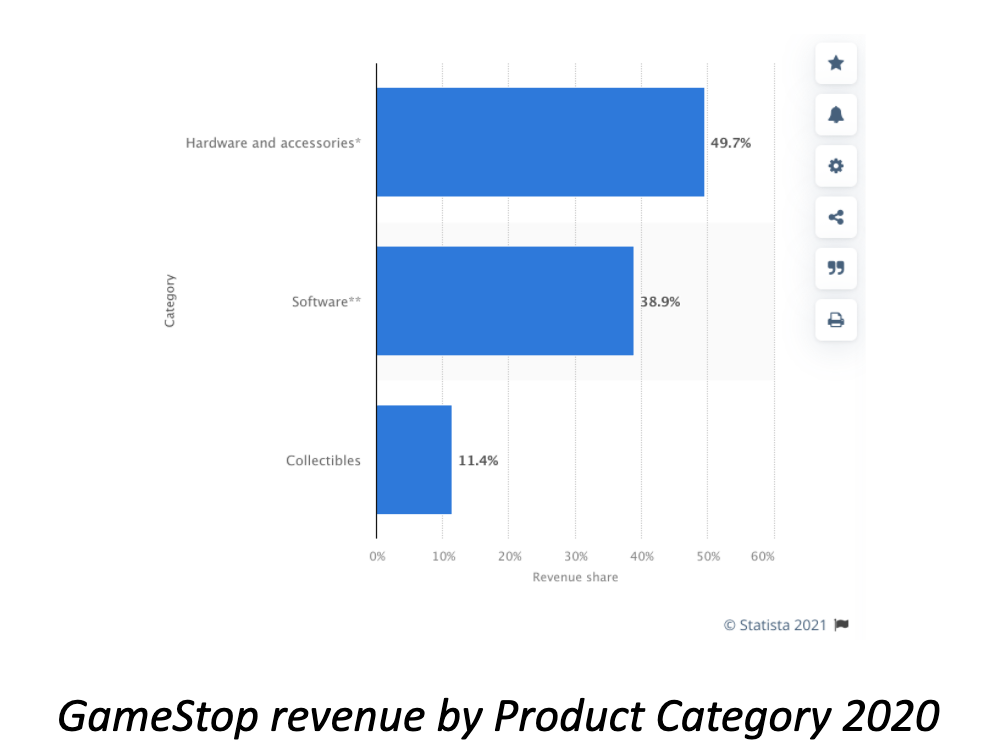 The major consoles that contributed to GameStops revenue were the Playstation 5 and Xbox Series One. In the recent Epic vs. Apple lawsuit, when asked how much margin Microsoft makes on the Xbox consoles, the head of Xbox business development stated, “We don’t; we sell the consoles at a loss”. This is because the console market is a “hardware subsidy model, where game companies sell the consoles at a loss to attract new customers. Profits are then generated from game sales and online service subscriptions (source).

Each major game console manufacturer creates new consoles every four years on average, which creates growth challenges to GameStop in interim years between releases. An additional challenge to GameStop’s future revenue is that each manufacturer operates online digital stores for instant purchasing of games, which is quicker to play than even Amazon can ship. It is estimated that around 50% of console and PC game sales are now being made through an online purchase. Adding insult to injury, both Microsoft and Playstation offer consoles without digital disc drives, requiring digital purchases to operate. 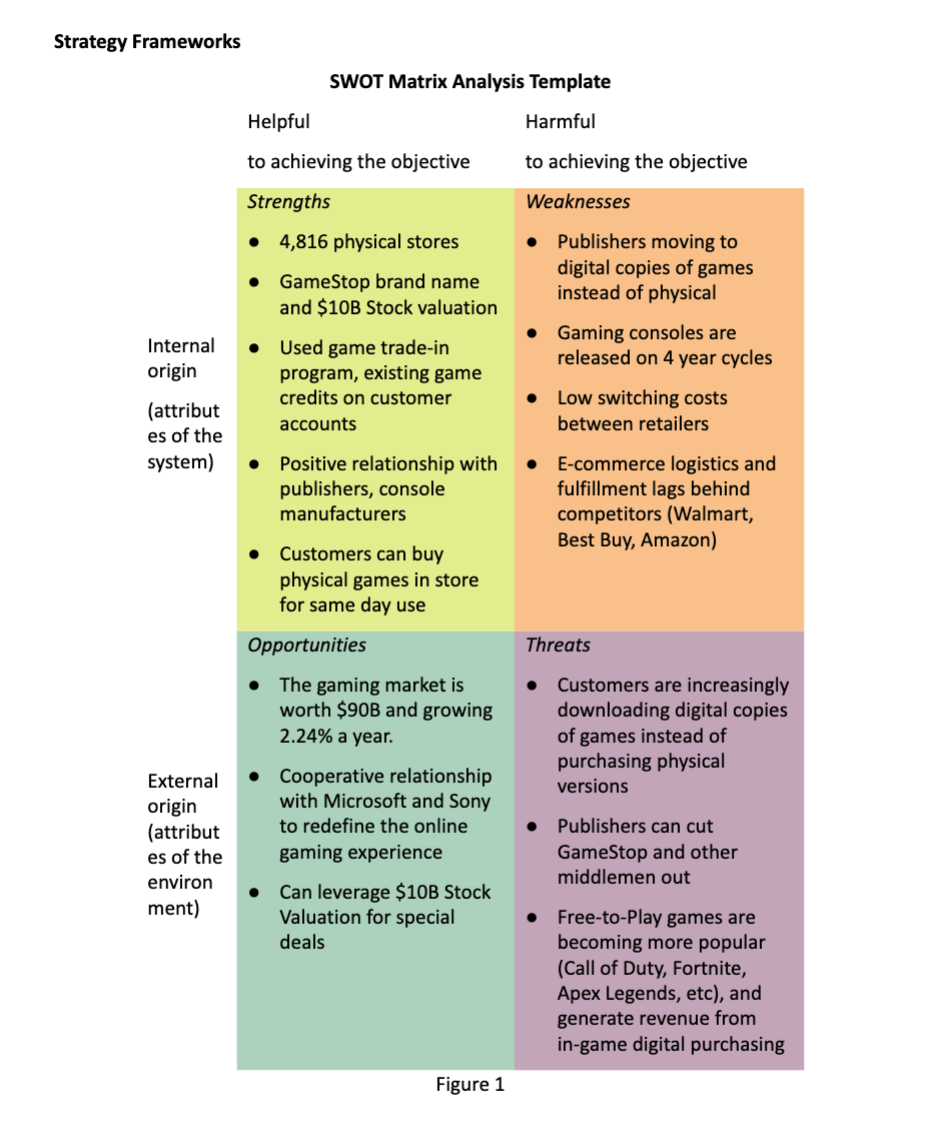 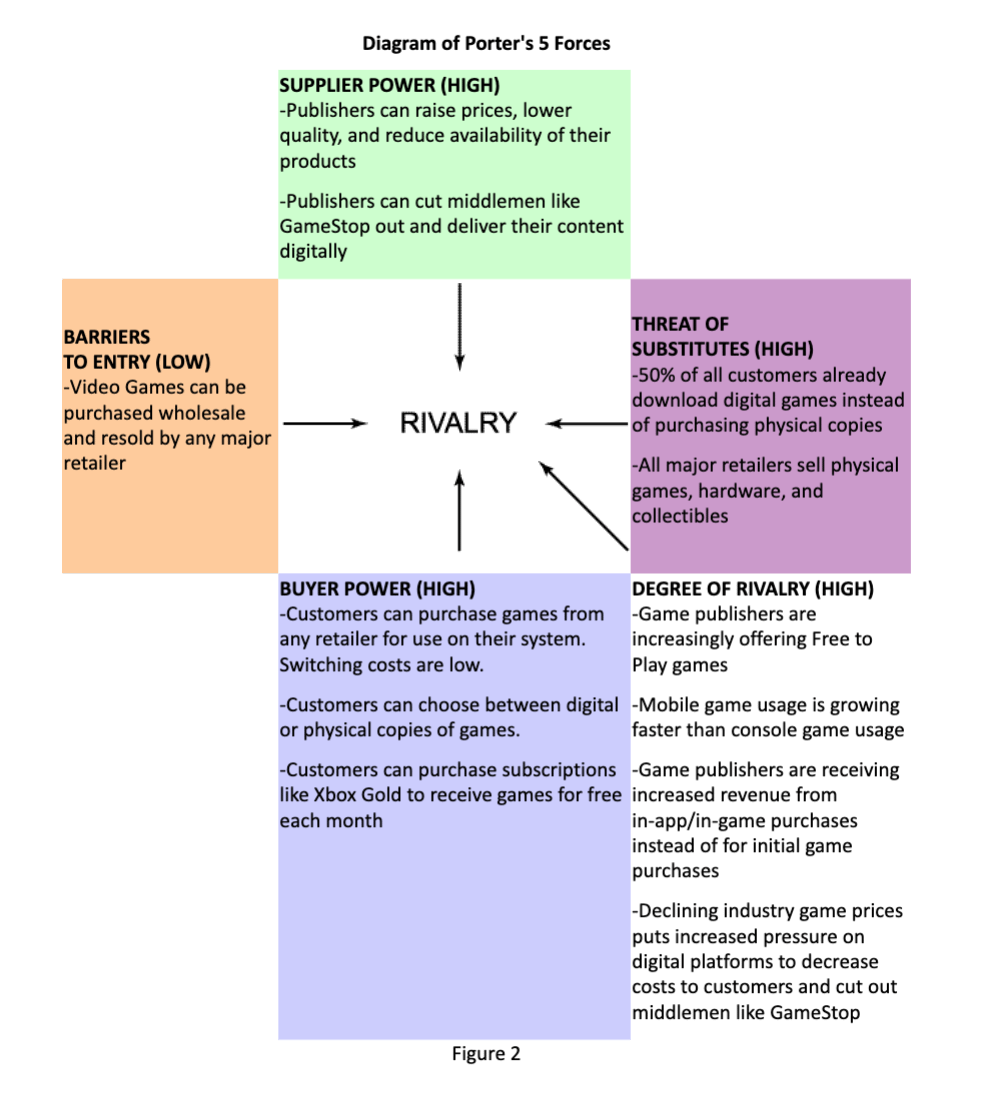 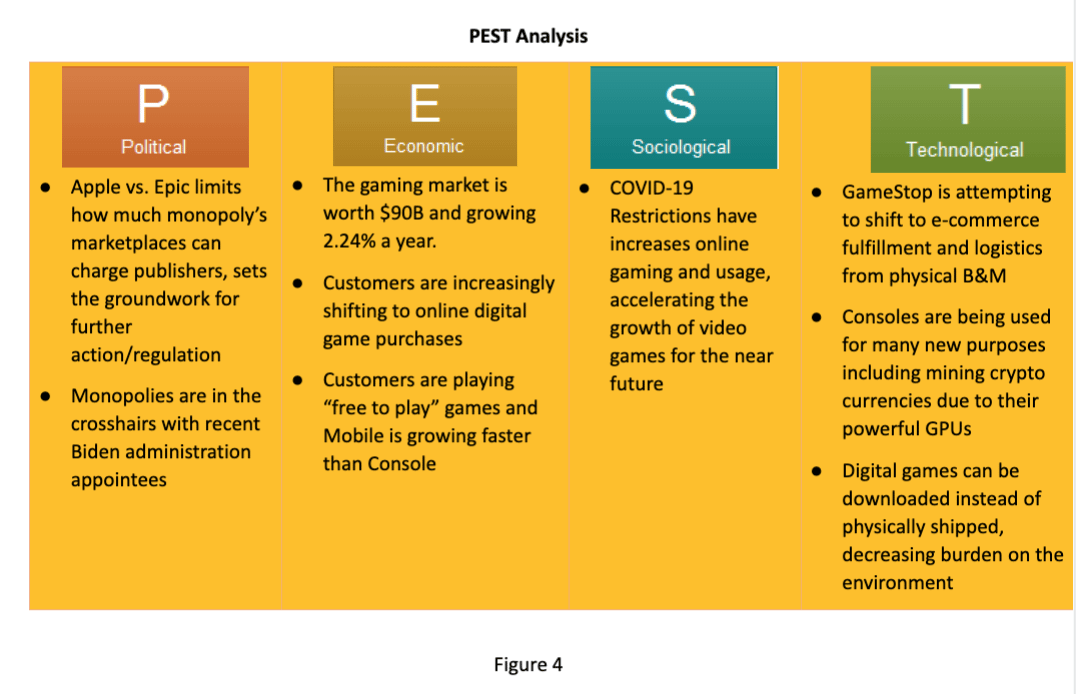 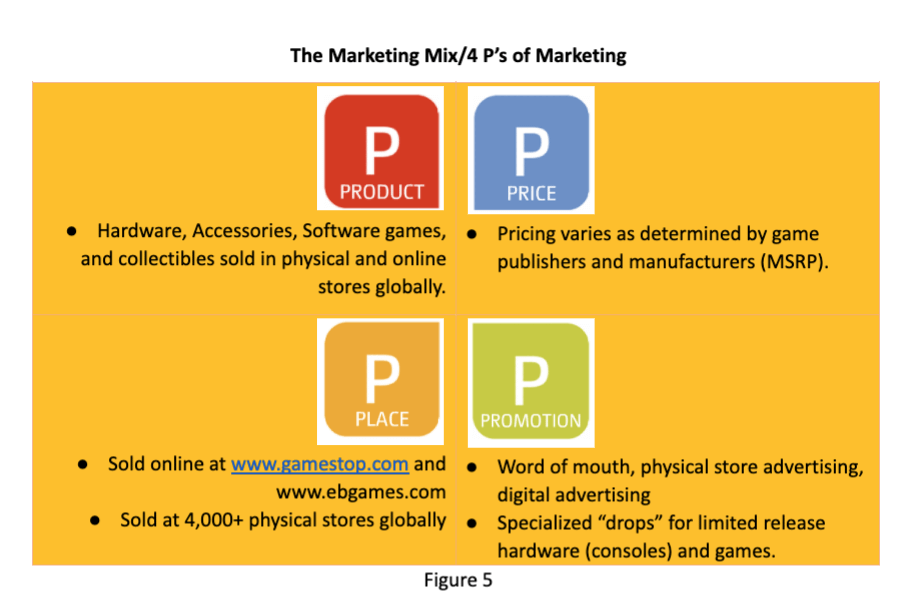 GameStops customers are increasingly purchasing digital copies of games directly from Microsoft, Playstation, or Nintendo, instead of physical copies from brick and mortar stores. It’s estimated that 50% of sales are now digital, and growing.

SWOT Matrix (Figure 1) and Porters 5 Forces (Figure 2), show that there are increasing threats to the GameStop retailer business model, not only from traditional competitors (Best Buy, Walmart), but also from online retailers such as Amazon and direct-to-consumer marketplaces (Xbox, Playstation, Nintendo Stores). The PEST analysis (Figure 4) shows that marketplaces have a unique sensitivity in today's legal atmosphere that can be utilized to negotiate with Console Manufacturers. Marketing Mix (Figure 5) shows that GameStop does not have a unique marketing position or product offering to leverage. Amazon fuels it’s growth from nascent businesses by utilizing it’s profits from Cloud (AWS) while operating at scale to decrease costs while increasing selection. Amazon even created its own last mile delivery and transport hubs to reduce costs and compete with FedEx and UPS. It’s not feasible for GameStop to do so. 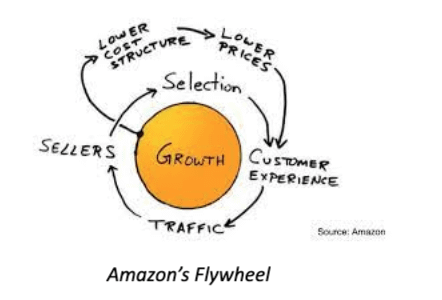 In analyzing the current market, positioning of GameStop, and threats to the business, GameStop’s future is not certain. GameStop risks following in RadioShack or Circuit City’s footsteps.

GameStop should continue to leverage its sales of Console hardware, accessories, physical games, and used games/trade-ins for the near term. Instead of redeveloping their supply, logistics, and fulfillment chains to maximize delivery speed, GameStop should leverage it’s existing relationships with manufacturers and game publishers to receive inventory of releases early, and ship with promised delivery with UPS/Fedex. This allows low cost shipping options to be utilized without expensive logistic routes. Fervent fans can still receive their games or consoles on Day 1, but without the upfront CAPEX costs to GameStop.

Ultimately, Judo Strategy (Figure 6) suggests GameStop must find ways to use their opponents' weight and strength against them, rather than emulating what their competitors are already doing well. Drastic steps need to be taken to compete against existing and future incumbents. To increase high-value engagements with GameStop that correlate to retention (eg “Stickiness”), GameStop should create a digital wallet that allows customers to collect “coins” that they can spend to purchase new games, cosmetics, or in-game purchases.

Utilizing GameStops close relationship with Microsoft and Sony, GameStop should create a console app that performs hosting functions (mining) while connected to the internet. Porters 5 forces (Figure 2) shows that these consoles have expensive GPUs that can perform significant processing functions for centralized servers. Many server farms today mine cryptocurrencies with consoles due to these strong GPUs.

GameStop customers can then load this application and earn coins for every hour of hosting functions they perform for the collective platform. The hosting services could enable decentralized hosting of online video games and GameStops own e-commerce website. If a customer leaves the app on, performing hosting functions for the decentralized server for one hour, they would earn 1 credit. A new video game release may cost 1,000 credits, in-game cosmetics 500 credits. Credits could also be purchased directly from GameStop instead of mining. This would enable game publishers to create additional mirrors of their games online to prevent ever increasing DDOS hacks which cost publishers millions while frustrating customers. This JUDO strategy allows GameStop to shift and compete in a whole new way, while the industry cuts out middlemen with Free-To-Play, digital downloads, and in-app purchases.

Each customer's wallet would be tied to their GameStop account. This customer data would be aggregated to identify unique users. Aged GameStop accounts could be renewed and tied to new wallets. Mining/hosting, spending coins, purchasing coins, and browsing the coin marketplace would be high value engagements (HVEs). As the gaming industry shifts completely to digital games, which could occur as soon as four years from now, GameStop can leverage this hosting strategy to grow revenue directly for game publishers, while competing with “Free to Play” games. This enables game publishers to continue to create high budget games, without charging exorbitant prices to customers (which data shows customers are resistant to pay).

You would work with the new Sr. Platform Manager of Xbox and Playstation (see assumptions section above), to select three pilot game publishers for this launch. They may include Epic Games (Apex Legends) and Activision (Call of Duty), among others.

The initial MVP would comprise the following headcount:

After MVP development, the idea could be iterated on to improve hosting utilization and even sell spare hosting to the general web hosting marketplace. This would include cloud content delivery networks similar to Cloud Flare ($38 Billion Valuation).

Would you leave your console on to mine game coins?

Important Note: I have no holdings in GME or interest in the company. This is not investment advice.