Gamma squeeze of the century on last year's leaps

Gamma squeeze of the century on last year's leaps

I know what you're thinking: Not everything is a short squeeze, these have been beaten to death more than I was by my stepfather.

All I ask is you give me the chance my wife's boyfriend wont.

Last year, 2 weeks before the silver “squeeze”, I made a post about First Majestic ($AG) that went largely under the radar until it shot up over 120% in the following 2 weeks.
https://www.reddit.com/r/wallstreetbets/comments/kxi76i/rise_of_the_silver_surfers/

I am here to talk about the aftermath.

If you are lazy and want a 2 min summary, read only the bolded sentences for the TLDR.

So how did last year's silver “squeeze” occur, and what were the long term effects of the event? Well for one, banks are to silver as hedge funds are to GME. Just at an enormous scale. I am talking David vs Goliath here. When silver shot up to $30 in Jan 2021, banks dumped paper contracts worth millions of ounces onto the market, effectively collapsing demand through artificial excess supply. Not only that, but SLV itself was a setup by the banks from the get go (this will briefly be covered at the end of this post.)

Regardless, long term silver investors saw this as the final break in the silver market. Something they have been waiting decades for to occur. These dinosaurs have been hoarding precious metals non stop before most of you were even born, despite the rampant suppression in the precious metals market by the banks.

So what do these boomers decide to do after seeing all these events unfold on Jan 28? They buy a copious amount of LEAPS on everything from the SLV to miners like First Majestic Silver. (context: LEAPS are call options typically expiring in a year or longer). These are high leverage long term plays.

The perfect date? Jan 21 2022, more than a year away from expiry at the time. Not only does this allow for long term capital gains, but higher silver prices seemed inevitable with the actions the Fed was taking. There was no way this could go tits up.

Now, I don't want to get too much into why or how silver has underperformed over the past 18 months in an environment where even your mom's OnlyFans subscription is skyrocketing in price.

What I am here to talk about with you today is the effect these leap options are having now that we are less than 4 trading days from expiry.

Open interest indicates the total number of options that are still being held by traders (unsettled).

Let's take a look at a mining stock that saw the heaviest trading at the time of the silver squeeze: 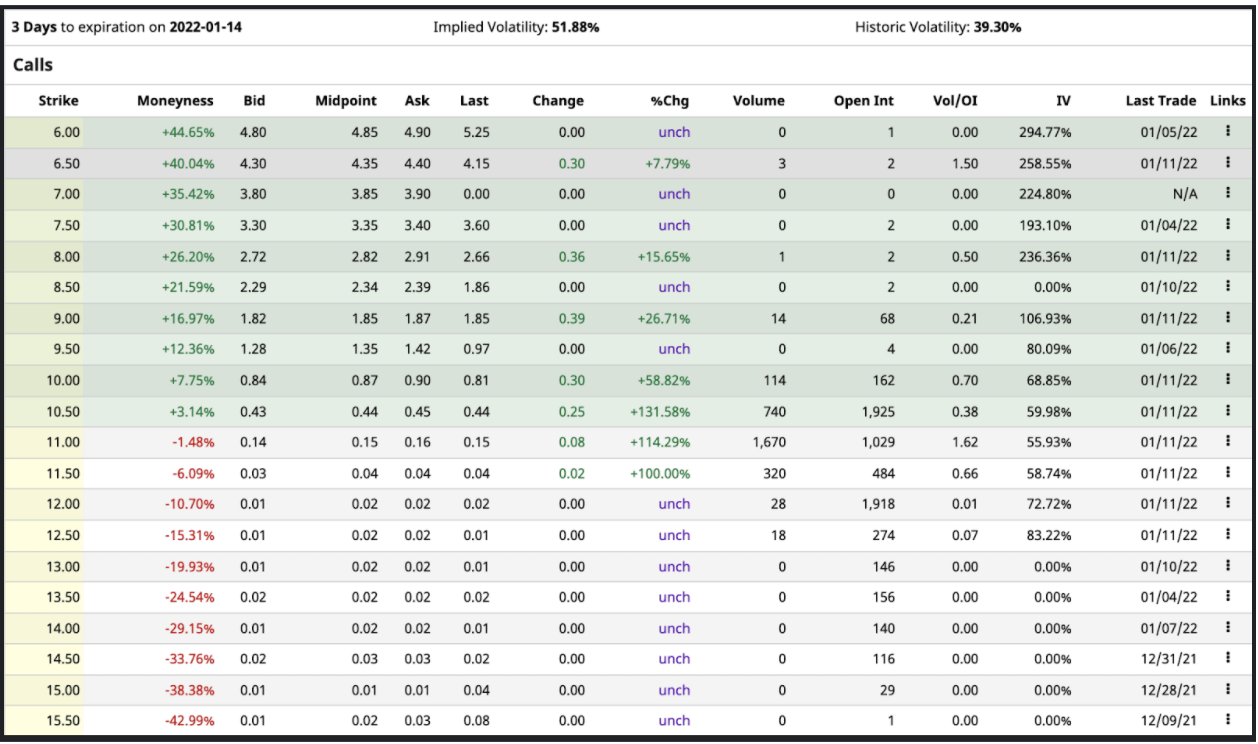 These are options that expired last week on Jan 14, 2022 (Snapshot is 3 days before expiry). Taking a look at the open interest, we see there were around 6,000 options being held by traders with about 2200 ending in the money. Something to note is that open interest typically increases each week you get closer to expiry as more traders pile in.

Expiration dates further out typically have less open interest. Jan 28 only had about 2000 in total open interest on Wednesday. 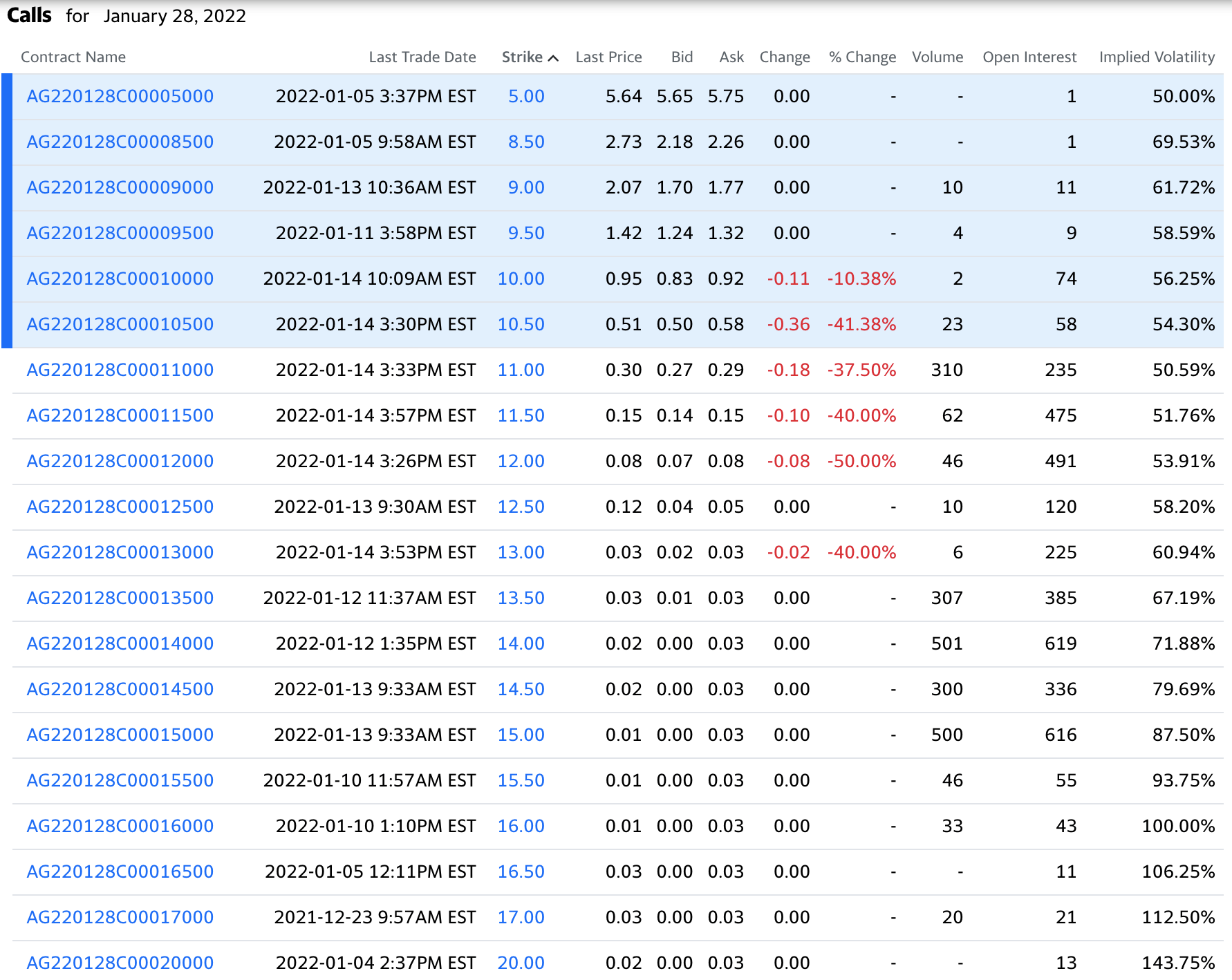 However, Friday we saw some more activity. Some buffoon decided to purchase over 1600 OTM options on the 13.5-15 strikes. A degenerate or someone with inside info? Time will tell. The cost of these would only have been about $5000 since they are so far OTM. This brought up the open interest to 3786.

The next week, Feb 4, has almost no open interest with around 800 contracts seen below: 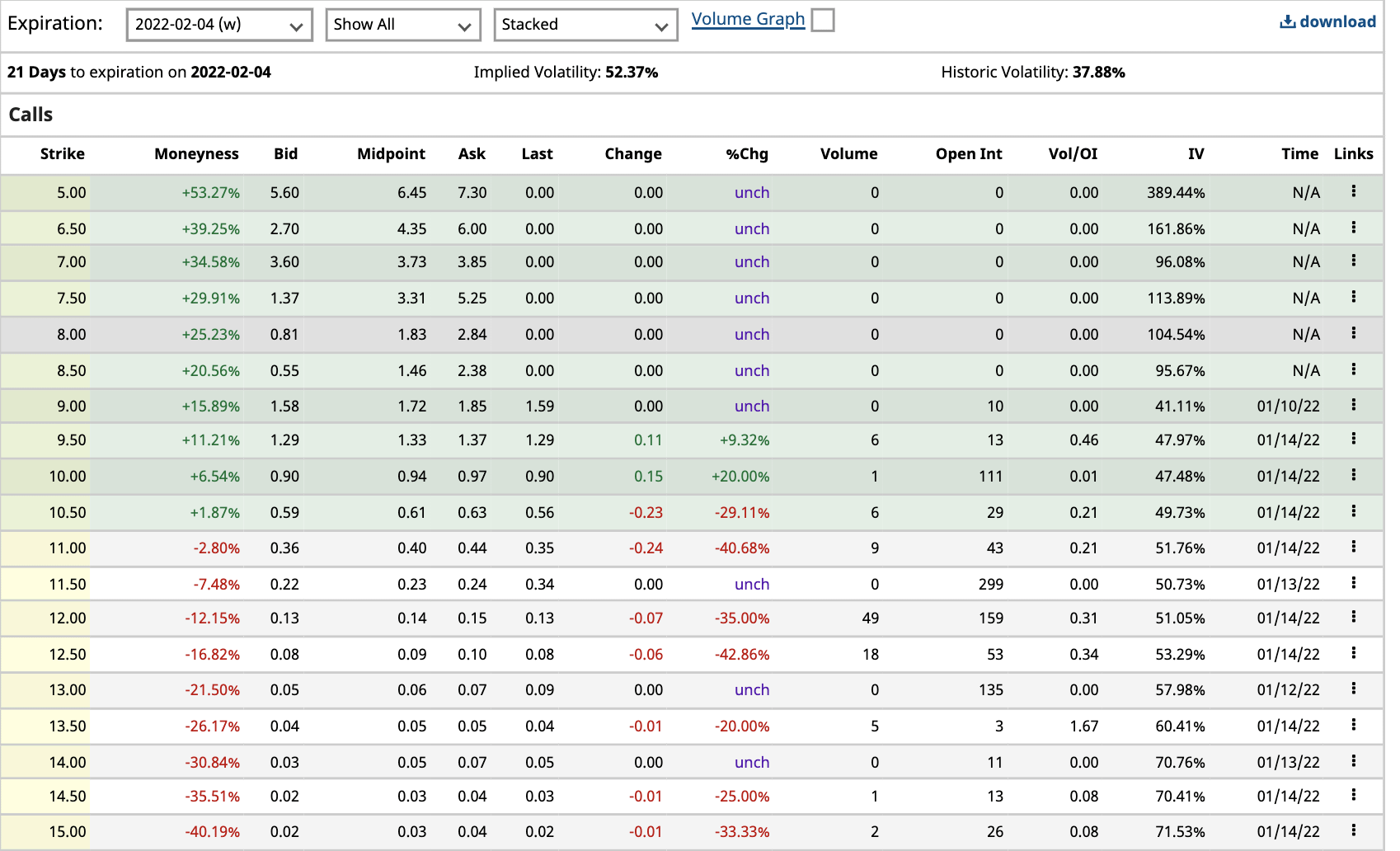 So what's the point of telling you any of this? Well if you keep these open interest numbers in mind, we have a reference point when looking at our leaps.

Let's take a look at the open interest for those LEAPS we mentioned expiring on Jan 21, 2022: 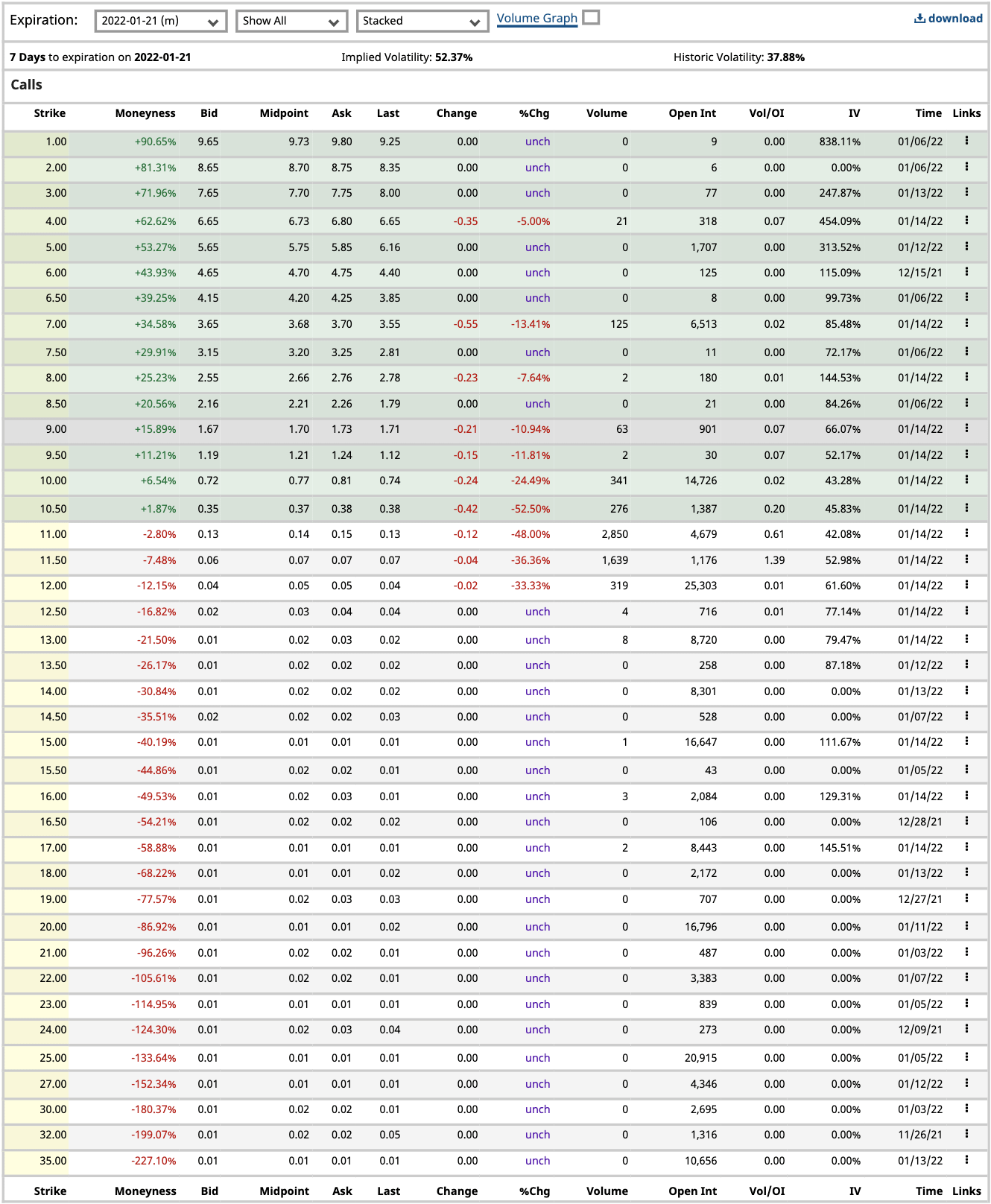 Well that can't be right? There are over 167,500 (at the time of this writeup) contracts still held by traders. That is astronomical compared to the 3800 and 800 being held for the aforementioned expiration dates. These 167,500 contracts are equivalent to 16.75 MILLION shares when executed. This is in the context of a stock whose average daily volume is 3.6 million.

So what does this mean? Well about 26,000 of these contracts are currently in or near the money. For each of these contracts, the seller of the call contract will have to come up with 100 shares. Market makers know this and at this point most sellers already own the shares and are prepared to hand them over come expiration time. That's 2.6 million shares that are likely already owned.

But what about the contracts that aren't in the money? There are 141,000+ contracts with high concentration on the $12, $13, $14, and $15 strikes. These calls are largely unbacked by shares due to Market Makers aiming to be delta neutral (only buying shares if we start approaching the strike price). Since these strikes are a bit out of the money, there has been no reason for MMs to hedge by holding shares.

But what if these calls gradually started moving in the money? That is 14,100,000+ shares that market makers would need to obtain if all of these strikes aproach in the money.

So what would happen if the price of the shares started nearing the $12 mark? Well we see the open interest at the $12 strike is 25,000 contracts. Meaning 2.5 millions shares would need to be bought to hedge against these calls. This is more than HALF the stocks daily volume. What happens when MMs scramble to obtain 2.5 million shares? The price skyrockets, causing a domino effect where the next strike is now ITM (in the money). This process repeats at the next strike, an infinite money machine.

Even simpler: stock price approaches call strike -> MM forced to buy shares to meet obligations -> price rises -> higher strike calls in the money -> repeat. This only works if there's a significant amount of open interest like in our scenario.

This would cause a cascading event where if the $12 strike is reached, 13 would follow next, then 14, then 15 and so on.

First Majestic's volume has recently been waning and the average volume is currently 3.6 million. This means that days to cover would be almost 4.

Just how much is 14,100,000+ shares in this context? A stock float is the total number of shares that are available for public investors to buy and sell. In this case the float is 218 Million. This means that over 6.4% of the TOTAL available shares would need to be obtained (if all strikes are hit) over the course of 4 or fewer days from hesitant shareholders.

For more context, open interest in leaps bought last year on GME is 138,000 (Jan 21), with the highest concentration at the 950 strike price (52,000 open interest). The chance of a cascading effect is very low for GME as the majority of held options are concentrated at astronomically high strikes. I'm not saying it will or won't short squeeze, just that there it wouldn't occur due to a gamma squeeze until consecutive calls with high open interest start being hit.

For First Majestic, the highest concentration is on the $12 strike which is only 12% higher than the current price. Consecutive strikes also have an even spread of open interest allowing a ramp and domino effect. 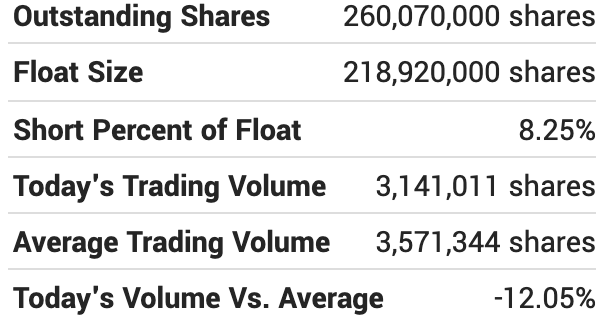 The cherry on top is that the short of First Majestic is around 8%. This would contribute to the rise of the stock but is not the focal point of this post. The majority of the movement would come from a gamma squeeze as previously covered.

SLV has a similar setup. LEAPS were heavily bought last year and there is still massive open interest for the same leap date (Jan 21). However, this is an extremely large ETF with heavy volume ($400M daily volume), much less volatility (making reaching strike prices nearly impossible), and is primarily manipulated by banks to leech money from boomers as explained here:
https://www.reddit.com/r/wallstreetbets/comments/mbx510/slv_is_a_complete_scam_its_a_scalp_trade_set_up/