Nike reports earnings tonight for their first financial quarter of 2022 (covering the months June-August 2021). The consensus revenue estimate calls for 12.54bn in revenue (1.6% q-o-q increase), with the highest estimate pegged at 12.9bn in revenue (4.6% q-o-q increase). Estimates call for EPS of 1.12, which has recently been revised downward slightly as people are worried about supply chain issues in Vietnam (more on that later).

Nike's brand strength and pricing power is unparalleled among retailers, and I think they will outdo the revenue expectations and see a decent upwards bump in price. Store reopenings in Europe and coastal USA should work in their favor this quarter, while they still benefit from tremendously strong digital channels.

Lululemon, a company that is somewhat comparable to Nike recently reported blowout earnings on September 08, so I will be comparing their performance to Nike throughout the DD.

In terms of store visits, Nike looks about as strong as Lululemon. While May and June were comparatively weak, according to this data Nike did very well in July and August to make up for it. They outperformed especially in New York and California, while being approximately on par with Lulu in Texas and Florida. According to Linkedin, they have also increased their sales personnel by 3% over the past 6 months, compared to Lululemon which actually decreased their in-store sales personnel by 6% (and still posted great earnings).

Caveat: this is the first time I’m using this data source for store visits, so I’m not sure how reliable this data truly is. It seems to at least match up with other data sources in terms of the peak months for each brand.

Nike has also seen a nice uptick in website hits in recent months. According to Similarweb, their website had a total of 361.5 million from June-August, compared to 330 million in the previous 3 months, for a 10% increase (compared to a 4% increase for Lululemon).

The big question mark and story to watch out for will be supply chain disruptions in Vietnam due to Covid lockdowns. Here is a good overview of the topic if this is totally new to you. A lot of analysts seem to be expecting an outsized effect of this on Nike's EPS (as they move towards airfreight to quickly get product out) as well as a potential negative effect on revenue guidance, which has caused Nike to drop about 9% from their recent ATH (in line with comparable retailers with exposure to Vietnam).

Nike is one of the retailers most exposed to Vietnam with roughly 50% of their products going through final assembly in Vietnam. Notably, BTIG Research recently published a note estimating a production loss of about 160 million pairs of sneakers, which I think is a big overestimate. If other analysts are expecting the issue to be similarly large, I think the call might surprise analysts to the upside for a couple different reasons:

So in terms of Vietnam, we source approximately 30% of our finished goods. And the impact of the Southern Vietnam closure is currently impacting approximately 20% of our second half inventory. [...] At the end of Q3, we expect inventory levels to increase approximately 15% to 20% relative to Q3 2020. While this level of inventory can support our increased revenue guidance I'm going to walk through in a moment, it is lower than we had initially targeted due to supply chain challenges. [...] We are assuming that Southern Vietnam begins of Phase 3 opening mid-September and that's what's implied in our guidance.

In short, despite a huge upside revenue and guidance surprise, Lululemon wasn't expecting huge disruptions as late as September 8th. They went into the quarter with about 1.5 months of revenue worth of inventory, the same exact number as Nike. As a huge company and great I expect Nike to have even greater operating leverage and pricing power to mitigate the impacts of the Vietnam issue

This is probably one of the riskier plays I’ve posted here since expectations for Nike are actually quite high. The main reason I’m even posting it is that they dropped quite a lot in the past weeks and it’s looking oversold, and the overall market looks strong right now. Don’t bet the house on this one.

Nike had fantastic earnings and a huge jump 3 months ago, and is now trading a couple percent above that level. It's somewhat uncommon (but not unheard of) for stocks to have 2 big jumps after consecutive earnings reports.

The Put-call open interest ratio is skewed towards put, which indicates people are generally bullish. This play more or less goes along with the consensus view, which isn’t always the right move.

Supply chain issues might be worse than I estimate. Even if they aren’t, Nike might decide to lowball guidance to play it safe. I'm not Vietnamese, don't read Vietnamese, and don't know anyone in Vietnam. I have no idea how bad the supply chain issue will be - I am simply making an educated guess based on publicly available English-language sources.

As usual I have taken a relatively conservative position with ITM calls that expire next week. As long as Nike hits 162 by next week (a 2% move up) I will breakeven.

An even more conservative play would be to do bull spreads, e.g. by selling puts at strike 155 and simultaneously buying puts at strike 150. As long as Nike stays above 155 you would make max profit. I think this theta play is relatively safe for some small gains, since 2 days ago Nike bounced off pretty hard at 152-153, the same level it reached right after its last earnings call.

A less conservative play would be calls at strike 235 expiring tomorrow. They cost just 3 dollars today, so all of you can participate in this play if you skip the chicken nuggets today. 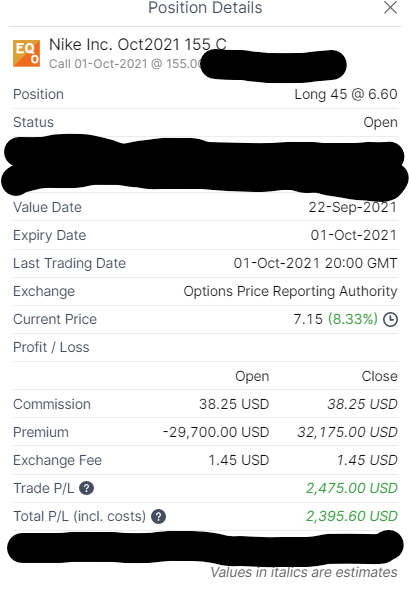