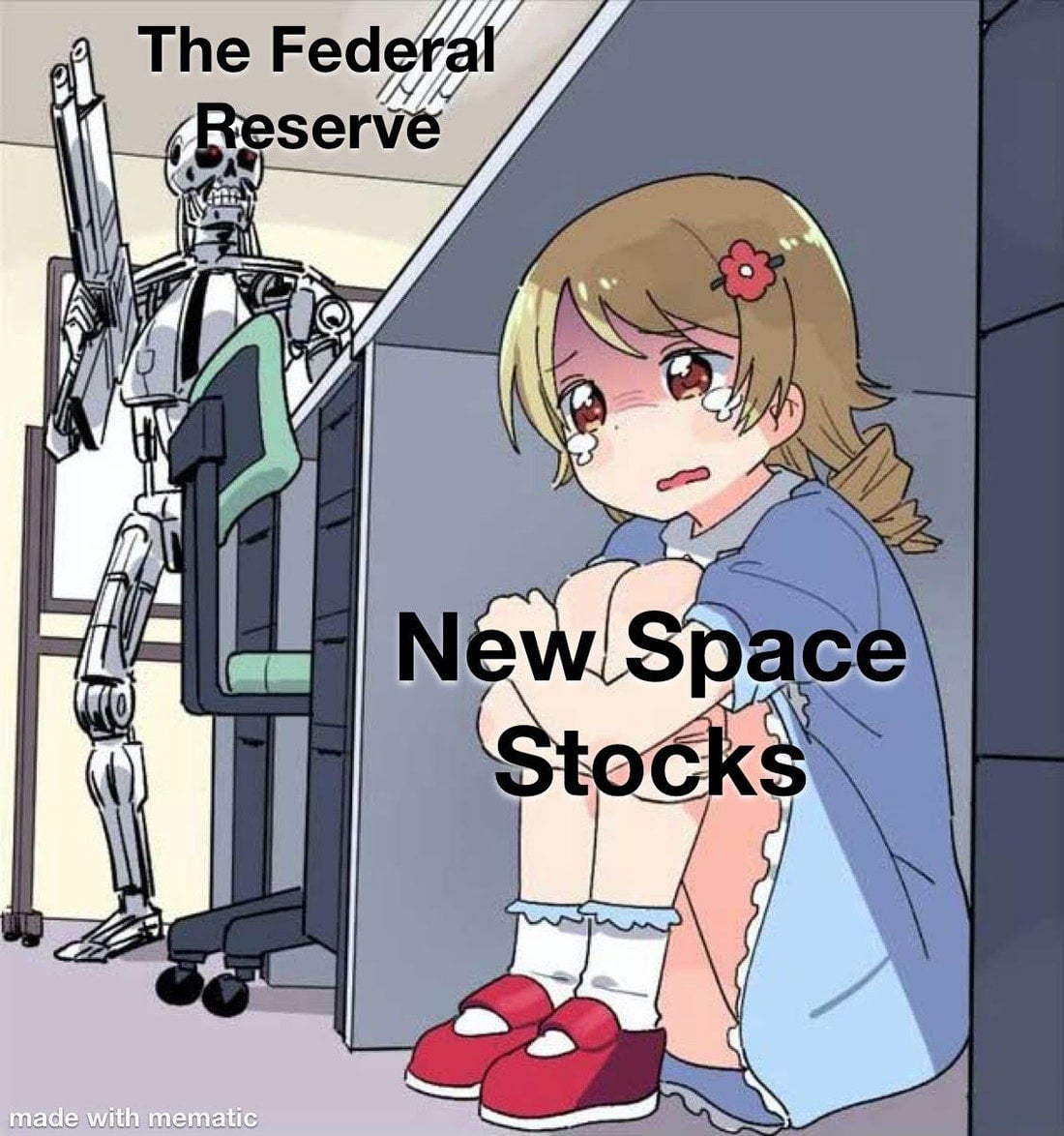 If you had been in an investing competition with my mom over the last 2 months, my mom probably would have won.

No, she isn't an investment guru, she's more of a Bogle-head who preaches ETF investing, but you—the reader—I assume you invest in (or are at least interested in) New Space stocks, which have struggled over the last two months.

New Space stocks have greatly underperformed the market since the end of October—$SPY is +1.8% through 12/22, while the market cap-weighted return for New Space is -20.6% (see the footnote below for constituents). This is slightly worse than the performance of Cathy Wood's ARK Innovation ETF (a proxy for non-New Space growth stocks), which has declined -19.0% over the same time period. 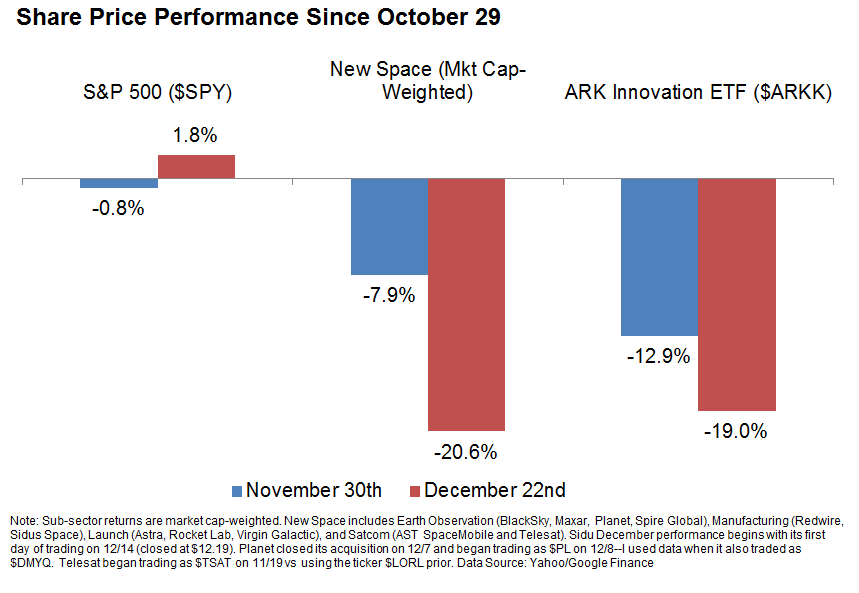 Here is what I see going on:

The Federal Reserve's recent shift in policy triggered a sell-off in growth stocks in November and December, including New Space companies. Further investigation reveals investor bias towards launchers vs earth observation (EO), manufacturing, or satcom. This pullback is probably healthy given valuation concerns surrounding New Space companies, particularly those having gone public via SPAC (i.e. all but $TSAT, $SIDU, $MAXR). Going forward, the key to New Space stocks working is execution of forecasted business/operational plans + meeting financial guidance on time. The stock market rewards consistent, incremental progress which is not necessarily how many of these New Space companies grew up before going public. 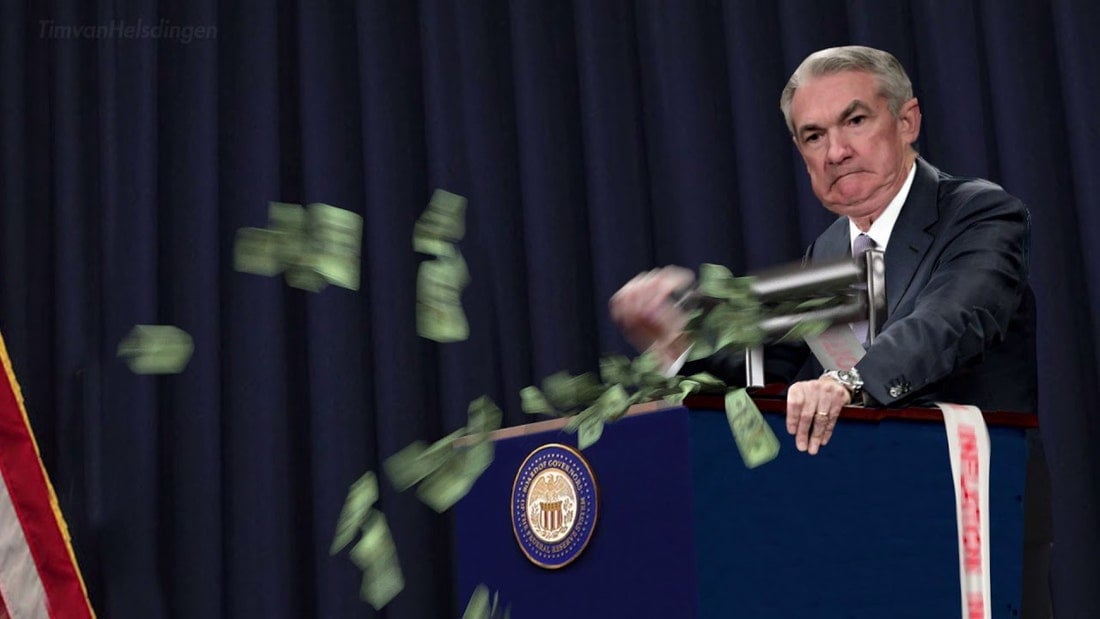 Traders and investors indicate that recent growth stock underperformance + increased market volatility has in-part been driven by repositioning into 2022 as investors digest the Federal Reserve's pivot in November/December from dovish (focus on economic growth) to hawkish (focus on controlling inflation).

However, I believe it was the change of outlook (versus the magnitude of change) that triggered investors to more closely evaluate growth companies whose valuations and projections may have gotten a pass in the equity-friendly low interest rate environment of late 2020 and 2021 which is when most New Space stocks went public.

Why Should New Space Investors Care About Interest Rates?

Rising interest rates matter for growth stocks (aka New Space companies) because investors measure the present day value of a company's future profits by using some form of the above formula for Net Present Value (NPV), the basic premise being that $100 today is worth more than $100 in the future (if you don't already understand the time value of money, check it out straight from the mouth of a valuation OG, NYU professor Aswath Damodaran).

When calculating the NPV of a company's future cash flows, changes in interest rates impact the variable “r,” or the discount rate, in the above equation. So if The Fed is raising interest rates, this means the denominator in the NPV calculation becomes greater (all else equal), which means a smaller present day value of the company's future cash flows.

Given that most New Space companies are not profitable in the near-term, rising interest rates are more meaningfully negative for New Space than it is for businesses that are already cash/profit-generative because most of new space's value is in their future cash flows.

Additionally, New Space in particular is at risk in a higher interest rate environment given the capital intensive nature of their businesses:

Launchers vs The World 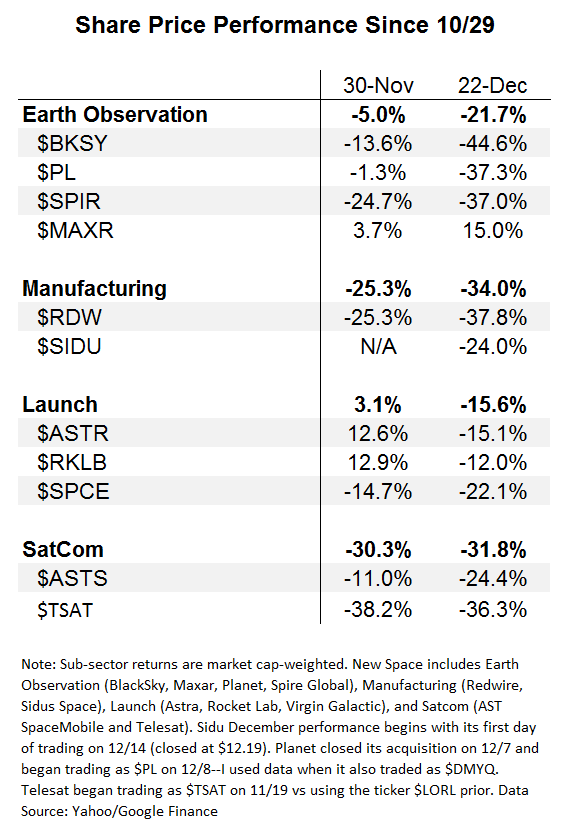 Since the end of October, launchers have declined only (lol) -15.6%, outperforming EO, satcom, and manufacturing.

Additionally, I looked at the timeline for when SPAC management teams projected their companies to breakeven—it doesn't seem like launchers have an advantage here, as profitability timelines would actually seem to favor $SPIR and $RDW. 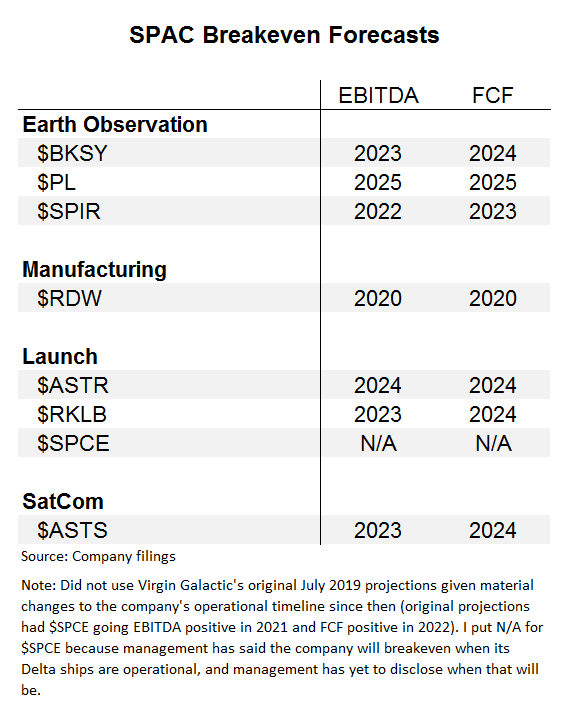 As simplistic as this may seem, I believe the bias towards launchers is due to investors' lack of familiarity with the New Space industry. To a generalist investor or someone very new to covering the industry, it is easier to measure progress of launchers (rocket goes into sky = big headlines), relative to EO (lumpy contract acquisition), satcom (next-gen LEO constellations are still pre-launch), and manufacturing (progress overshadowed by Redwire's accounting issues). While $ASTR and $RKLB have successfully launched fire-spewing and headline-grabbing rockets since going public, EO, satcom, and manufacturing companies have all stumbled out of the starting blocks in their early days of trading on the stock market, including multiple downward revenue guidance revisions from EO companies, and lingering investor uncertainty regarding $ASTS and $RDW's respective issues (launch delays and Audit Committee investigation).

For New Space stock share prices to appreciate going forward we need to see the following, as I highlighted in my note on 3Q21 New Space Earnings Key Themes:

Space is an industry that is literally pushing the forefront of what is possible for mankind, but the stock market is an area that requires a tempering of expectations—to see share price appreciation, it is often better to set expectations low and exceed them than it is to promise the world (the moon?) and end up short, even if progress made is material.
I'm not saying this balance should be easy (because let me tell you, it is not), but this concept is something public New Space management teams will have to consider as they grapple with how to communicate their results and outlook—even if they view themselves to be long-term oriented and not concerned with day-to-day movement of their stock.

Disclosure/Disclaimer: This post is not investment advice and represents my opinions only. Do your own research before making investment decisions. While I aim to write with an unbiased opinion, I have long stock positions in $ASTS, $RDW, $PL, and $RKLB, which are all mentioned in this post.