Alright, Gentlemen. Here is a follow-up on my original Monkeypox DD that I posted 4 days ago before most of the Western world even knew what was going on. For those of you who would like to check it out this is the link.

What happened since my first DD?

$BAVA / Bavarian Nordic trading around 80% up since my DD 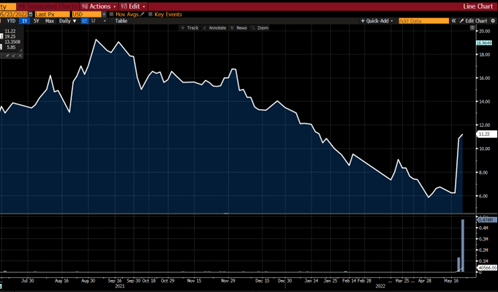 Development of MonkeypoxCases are up all over countries around the world. Belgium even introduced a quarantine for 21 days for people infected with the virus.

This is the latest case count according to BNO News: 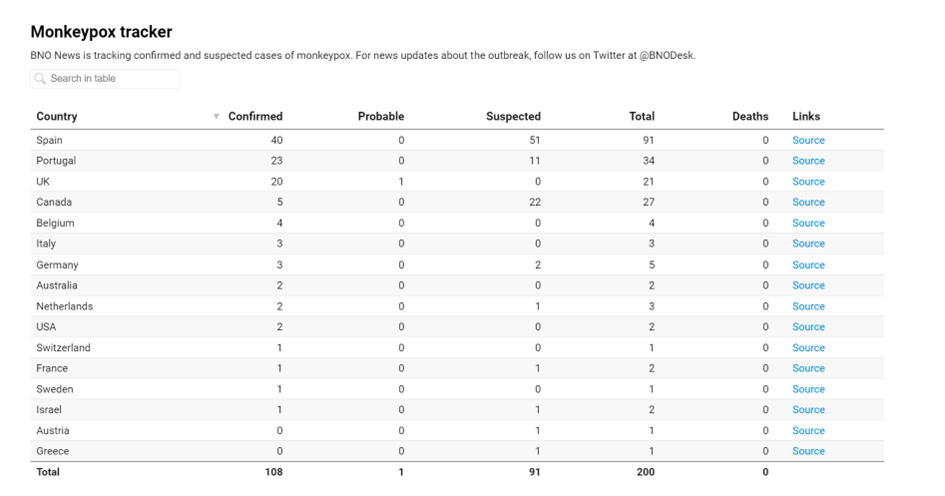 Outlook for the next weeksI believe cases around the world are going to spike. People are sensitive to virus-news after COVID, also the cases we see now are the outcome of being exposed to the virus 14-21 days ago, because it has a long incubation period. WHO experts also believe that cases will rise in the coming weeks and also expect them to rise because of Summer festivals and other parties. (Reuters). I believe that the next 2-3 weeks are going to show that this virus is NOT something that only spreads within gay communities.

**Has the Virus mutated and is it more contagious?**We are still waiting for data. It definitely spreads from human to human currently which is different to the last outbreak in 2003 in the US where people only got infected directly by animals.

Citing from an article on Science.Org:

This is not typical at all, says epidemiologist Rosamund Lewis, WHO's lead for poxvirus diseases. “We should definitely be concerned about this new situation, which has literally just come about in the last 5 days."

In a document regarding Guidelines for Smallpox Response and Management in Scotland in the Post-Eradication Era the NHS wrote:

If an outbreak of smallpox were to occur, several factors could contribute to a more rapid spread of smallpox than was routinely seen before this disease was eradicated. These factors include:· low population immunity to smallpox in the absence of naturally occurring disease and the discontinuation of routine vaccination· delayed recognition of smallpox by health professionals who are unfamiliar with the disease, and· increased mobility and crowding of the population.

What will happen now?

I was really bored the last days and read several documents on strategic guidelines how to fight the virus, I read a lot about strategic stockpiles of vaccines. I even read the WHO's guideline on the deployment of vaccines for a smallpox incident. Here are my takeaways:

So what is the bullish case for Emergent Biosolutions and Bavarian Nordic?

The WHO estimates that there is an emergency stockpile of 600-700m doses of smallpox vaccine available around the world that is pledged to WHO for the use in an emergency. Countries can as well maintain stockpiles that they would only deploy for the use on a national lever. These stockpiles likely still consist of first and old second generation vaccines that have massive side-effects and are even dangerous for people with pre-conditions. The first generation vaccines are even no longer licensed anymore.

I believe the WHO and governments around the world will completely replace the current stockpile of doses with newer vaccines available from $BAVA (JYNNEOS / IMVAMUNE) and $EBS.

Also they will stockpile antiviral treatments which would strongly benefit $EBS too that just acquired TEMBEXA.Bavarian Nordic says that current vaccines are inappropriate for up to 25% of the population with pre-conditions, JYNNEOS is safe to be administered to people with pre-conditions, because the virus (it is a live-virus vaccine) is unable to replicate and spread. People would actually get real smallpox from the old vaccines, that's why I believe nobody would like to use them today.

$EBS's vaccine only needs one dose, but since it probably could not be used in all parts of the population because of pre-conditions, governments will also have to stock up on an alternative (or even vaccine of first choice) such as JYNNEOS/ IMVAMUNE.

Data from 2017 suggest that one dose of IMVAMUNE in 2017 could be sold for 48 USD. https://www.genengnews.com/topics/drug-discovery/bavarian-nordic-wins-up-to-539m-barda-contract-for-smallpox-vaccine/In 2013 they were awarded a contract worth 228m USD for 8 million doses.According to this scientific paper that was used to estimate costs of vaccination against Smallpox the cost of a replicating vaccine such as $EBS's was 5$ per dose while that of IMVAMUNE (Bavarian Nordic) was 29$. The reference used to estimate the cost of $EBS's wasn't available anymore so I used another article that revealed the approximate price of around 17 USD per dose.

Derived from the data above I am using the following prices:

My basecase is that governments would want to replace vaccines and maintain the ability to vaccinate 1b people of the general population against smallpox in case of a wider spread of the virus or an attack with the virus (see below). National stockpiles are maintained by the US and after COVID caught governments off-guarded I believe other nations will also increase their stockpiles. No government can - after the recent outbreak - ignore the threat of this virus. There are several documents and studies saying that smallpox or monkeypox could emerge again if certain favorable conditions are met. I do not believe however the current situation is comparable to the COVID pandemic.

With political tensions going on worldwide smallpox was identified as a so-called Category A disease for bioterrorism (remember the immunity in the general population is very low at the moment). I can imagine it will become a matter of national security to be protected against a potential attack with this virus. The second disease on the list in Category A is Anthrax. Guess who has a vaccine and is already supplying it to the Strategic National Stockpile? Right, $EBS.

I do not give specific price targets for the stocks as I believe this will largely depend on several factors such as the public attention Monkeypox will get over the course of the next weeks. Also short interest in the particular stocks can have an impact. Also as I previously argued if governments will stockpile they will want to do it quickly, the companies will need to built the infrastructure too and this will likely end up in subsidies given to the companies.

I have recently noticed a few other tickers being mentioned that e.g. have vaccine candidates for monkeypox - be cautious with these. I believe existing vaccines will be used by governments this is not COVID19 all over again.

This is explicitly not financial advice.