PROTERRA - NOT YOUR TYPICAL EV STOCK THAT HAS GREAT POTENTIAL

I believe PTRA will reap great benefits from the recent approval of the infrastructure bill https://www.reuters.com/world/us/us-house-approves-715-bln-infrastructure-bill-2021-07-01/

As you can see PTRA directly benefits heavily in two different sections of the proposed bill.

Topics to be Discussed:

"Proterra is a high-growth commercial electric vehicle technology leader with over a decade of production experience. The Company has designed an end-to-end, flexible technology platform that delivers world-class performance and a low total cost of ownership to original equipment manufacturers (OEMs) and end customers. Proterra has three complementary businesses:

The Company's industry-leading battery systems have been proven in more than 16 million service miles driven by its fleet of transit vehicles and validated through partnerships with world-class commercial vehicle OEMs, such as Freightliner Custom Chassis Corporation (FCCC), Thomas Built Buses, Van Hool, Bustech, and Optimal-EV. To date, Proterra has produced and delivered more than 300 megawatt-hours of battery systems, more than 550 heavy-duty electric transit buses and installed 54 megawatts of charging systems.

Proterra operates manufacturing facilities in California and South Carolina, as well as a state-of-the-art R&D lab in Silicon Valley. The Company recently announced the opening of a new battery production line co-located in its electric transit bus manufacturing facility in Los Angeles County. This battery production line was established within a year and demonstrates Proterra's ability to bring its scalable and capital-efficient battery manufacturing process directly to commercial vehicle OEMs alongside their existing manufacturing." Pulled from investors portal on Proterra's website.

Funds and Accounts Managed By:

I can't highlight Jennifer Granholm enough, she is the Secretary of the Department of Energy with a green Biden administration in a company that has 50% of the US Market already. Her CNN ties could prove to be an excellent source for PR as well. It's also important to mention that the Biden administration have mentioned Proterra multiple times.

As mentioned in the overview, the company really operates in 3 capacities: Proterra Powered, Proterra Transit, and Proterra Energy.

On February, they had the largest EV bus deal in the US struck with Maryland.

Proterra has an extremely large lead and has a distinct first mover advantage. The second place competition (Romeo) is still lagging far behind Proterra.

Real World Miles Driven: Proterra has driven over 16mm real world miles, no other competition has driven any.

Revenue (2020E): The only other competitor to generate mentionable revenue was Romeo with $11mm. Proterra generated $193mm

Production Track Record: Again, Romeo is the not-so-close second having produced minimal items and being founded in 2016. Proterra has been in production for ~10 years.

All data derived from SEC forms and the investor presentation.

Let's do a little evaluating ourselves:

Average between adjusted and unadjusted:

Here is another analyst finding it undervalued in a similar way on Feb 10th. 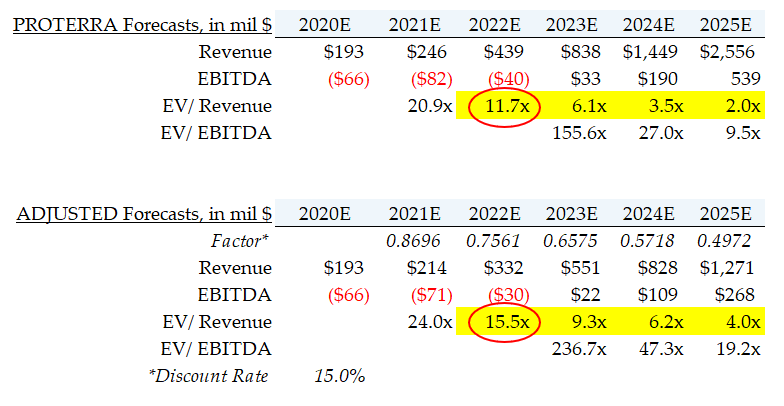 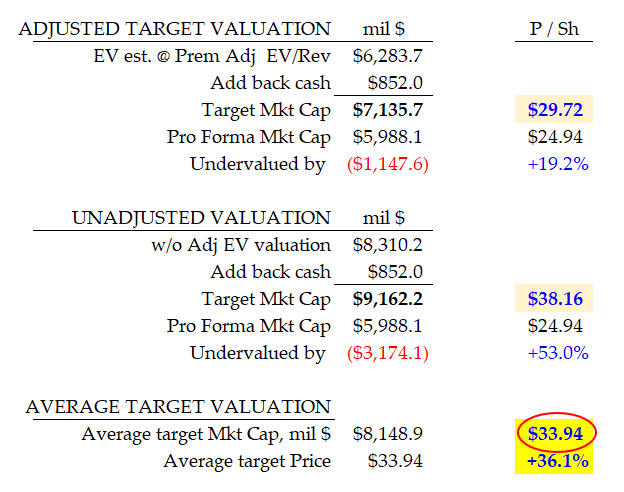 Let's think about that for a moment...

As of this writing PTRA is trading at $16.92, based on purely fundamentals without speculation it is trading 100.18% below it's actual value.

Proterra is not only one of the most undervalued EV stock on the entire market, it's also positioned to be one of the best performing companies over the next several years. With an incredible first-mover advantage (16mm driven/10 years production) and a massive lead on the market (50%+ US market share), there is nothing stopping this stock from absolutely exploding.

The company is currently undervalued by 100.18% on fundamentals alone, and that's on the "fair" end. When people realize what is actually happening here and what this is about to become, I think the hype and excitement has the potential to drive these prices much higher. I see a TSLA situation brewing. No not because it's just another EV company, because it's an established, well-connected, constantly growing commercial EV company.

Shares and a couple Aug and Dec calls. Options are cheap and have low IVs.

TL;DR: This is the ultimate infrastructure play.