$RDBX can and should make a $SPRT type move. Set-up is identical

$RDBX can and should make a $SPRT type move. Set-up is identical

I've clarified the SPRT value being based on $2.14/share. Changes in italics. I've also added some fun math highlighting my point at the bottom.

For those that don't remember $SPRT. It was a company that was merging with Greenidge ($GREE). The proportion of the shares of the new business that $SPRT would receive was set in stone based on $SPRT being valued at $2.14/share ($SPRT shareholders would receive 0.124 shares of $GREE for every 1 share of $SPRT). Shorts saw a great opportunity as the stock was trading around $3-5, so they piled in. So many got in, that $SPRT starting popping up on all the top SI lists, so retail took action and started buying. The price then steadily went up for about a month until BOOM, it took off and flew all the way to $60! $60 for a company that in just in a couple of weeks was going to still only give $SPRT shareholders a fractional stake in the new company that was based on $SPRT at $2.14!

Does this sound familiar?

$RDBX enters into a terrible merger deal valuing its shares at under $1. The stock tanks at the news. Shorts, seeing an easy pay day, pile in. Almost everyone I follow on Twitter was seemingly talking about their idea to short the stock. So, we're even getting retail shorts piling in. They pile in so much show, that based on the most recent short interest data published today, the short interest is 180%! Cost to borrow is on average 532% meaning every day a short holds their position, they're paying 1.5%. And the CTB number has gone as high as 807% just today (2.21%/day). On top of that, the stock keeps going up meaning margin calls on top of high borrow costs. To make matters worse for shorts, we don't know when this deal is closing. It says 2H of 2022. Most mergers take 6 months on the low end to complete and this is one that has a lot of legal cases against it due to the price given to $RDBX shareholders. So, we are likely looking at November/December as a best case scenario. 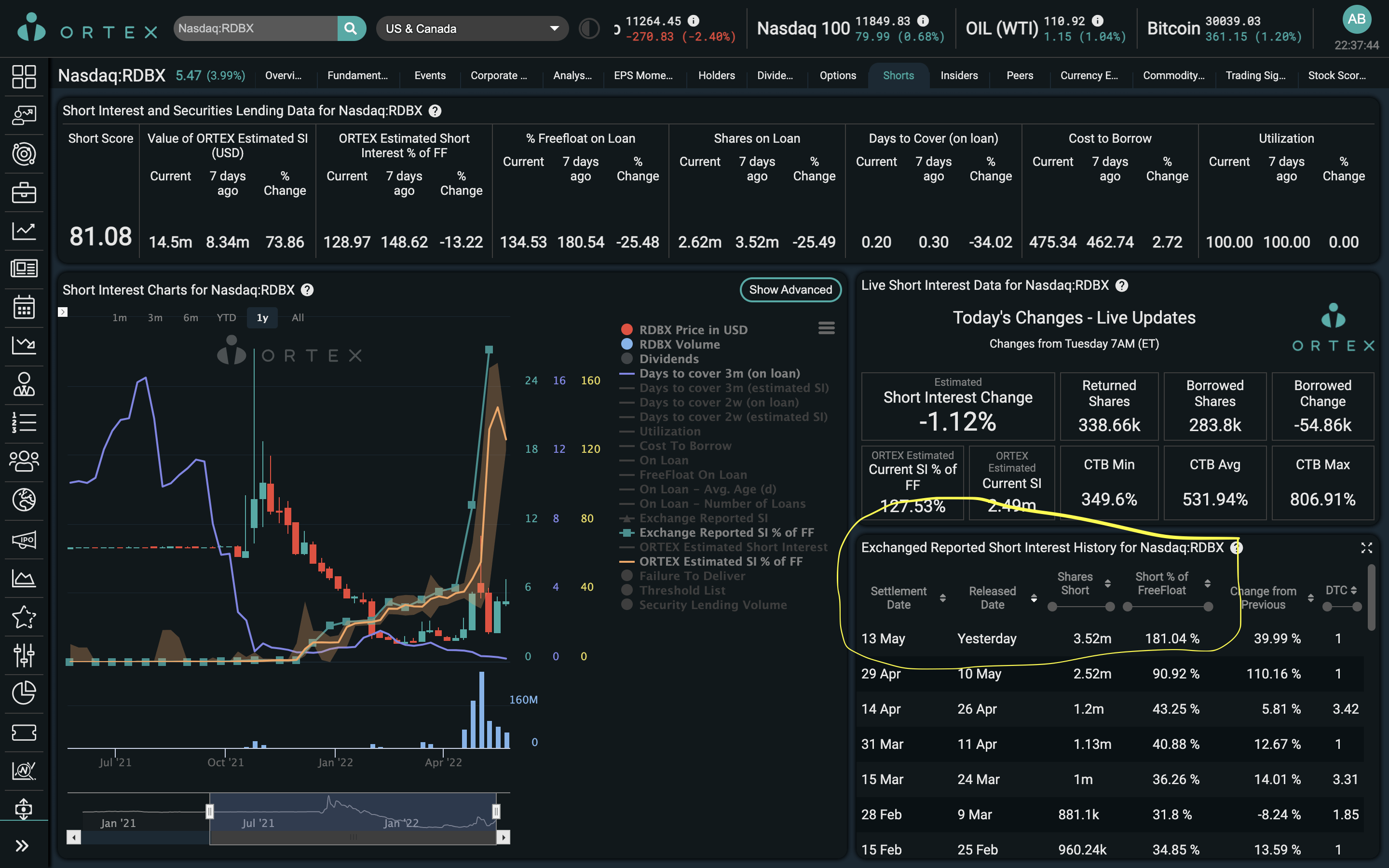 Now, having been part of the $SPRT squeeze, I do think there is one key difference here. A lot of traders during the SPRT run didn't seem to understand the value they would be given for their shares once the merger occurred. Many were touting the merger as a catalyst. $GREE was a crypto play and crypto was hot so people were excited to see $SPRT merge with this company. $SPRT actually held above $20 up until the final merger vote and then collapsed.

Ignorance was bliss in the case of SPRT because the value of $RDBX shares at the time of merger is completely irrelevant here. Once retail and whales understand that, this will fly. It's obviously already started some, but has a long way up to go to reach $SPRT numbers. We have months where we dictate the value of $RDBX, not a bad merger deal. In fact, I view the merger deal as a POSITIVE. One, it greatly increased the short interest and also added inexperienced short sellers who won't have the capital to wait this move off and will have to cover. And two, and more importantly, this has eliminated the risk of a dilutive offering from $RDBX. We've all been in squeeze plays that were going great and then we get the dreaded offering. Not gonna happen here. How could they do an offering above the share price that they've declared their company worth at the time of merger? Not gonna happen.

So in closing, we are staring at the best opportunity since $SPRT. It could be easily argued this is a better opportunity than $SPRT as we have higher short interest, higher cost to borrow, and a lower float.

OK, so below is a bunch of math and probably over-explaining how the deals are similar, so you can skip this if you don't care, but I just want to drive home the point and answer some of the critics. Some people have challenged my $2.14 and referenced page 9 of the $SPRT/$GREE merger deck. Here is page 9. 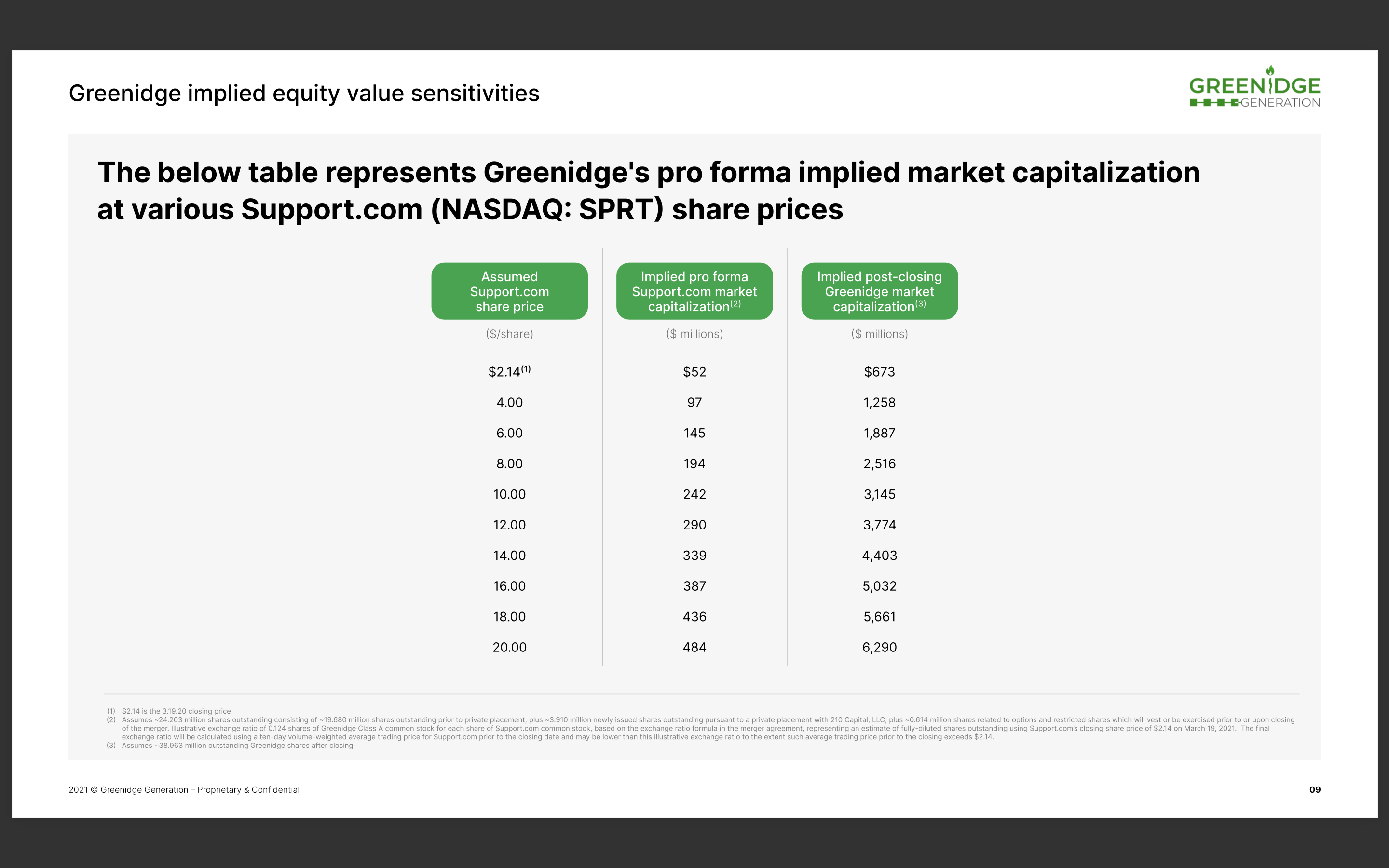 Their point is this shows the value of GREE at different SPRT values, so the price isn't set in stone. They are correct it wasn't set in stone. Similar to how RDBX is not set in stone because RDBX shareholders get a fractional share of $CSSE which has a moving share price. What is set in stone is the terrible multiplier. So, with $SPRT at $2.14 which is when the 0.124 was locked in (look at fine point number 2 on this slide), the market cap of $SPRT is $52m, GREE is valued at $673m. $673m - $52m = $621m. The GREE portion of the new business, with $SPRT at $2.14 is worth $621m.

You could make the same BS chart for RDBX and assume that every penny of increase in market cap we create for Redbox will be transferred to the market cap of CSSE at a ratio of 1/0.087. So, every dollar of Redbox market cap we create should therefore create $11.49 in CSSE market cap (1/0.087). So, if we got Redbox to $10, the market cap of Redbox would be ~$120m and therefore, at the 1/0.087 ratio, we would then pass on $1.38B in market cap value to $CSSE. That's obviously not the case, just as it wasn't the case with SPRT. Shorts know that and that's why they piled in. Extremely similar cases.

Good luck everyone! Let's get it!

Disclosure: I am long on common shares. I am not a financial advisor. Do your own due diligence