Rocket Lab (RKLB) will attempt a first stage recovery via helicopter capture during their next scheduled Launch. The “launch window” or time period when the launch can occur opens on Friday April 22nd at 22:35 UTC (edit - changed to Saturday April 23rd at 22:35 UTC). If successful, Rocket Lab will become the first publicly traded company and second company ever (SpaceX) to successfully recover a first stage in a condition possible for reuse. Why does this matter? It's simple. 80% or more of the rocket's cost to produce and launch is in the first stage. This will save RL a significant amount of money when stages are reused. Cost go down, launch rates go way up, and money will rain from the heavens (launch prices will stay the same as they have largely at SpaceX) …

In other words, throwing away the first stage each flight is equivalent to throwing an entire airplane in the trash after a single flight. Recovery is everything for a profitable launch services company.

1) This stock has been held down post IPO by the large internal investors (VC's) selling off chunks of their long term holdings and the few internal shareholders selling their shares off (staff). This has now slowed as evidence in the decrease in volume the last few weeks. There were about 500 mil shares outstanding around IPO, the 6 month lockup ended right around the 1st of March. Volume increased immediately and hung around pretty high for most of the month allowing those early VC's a good chunk of cash if needed: 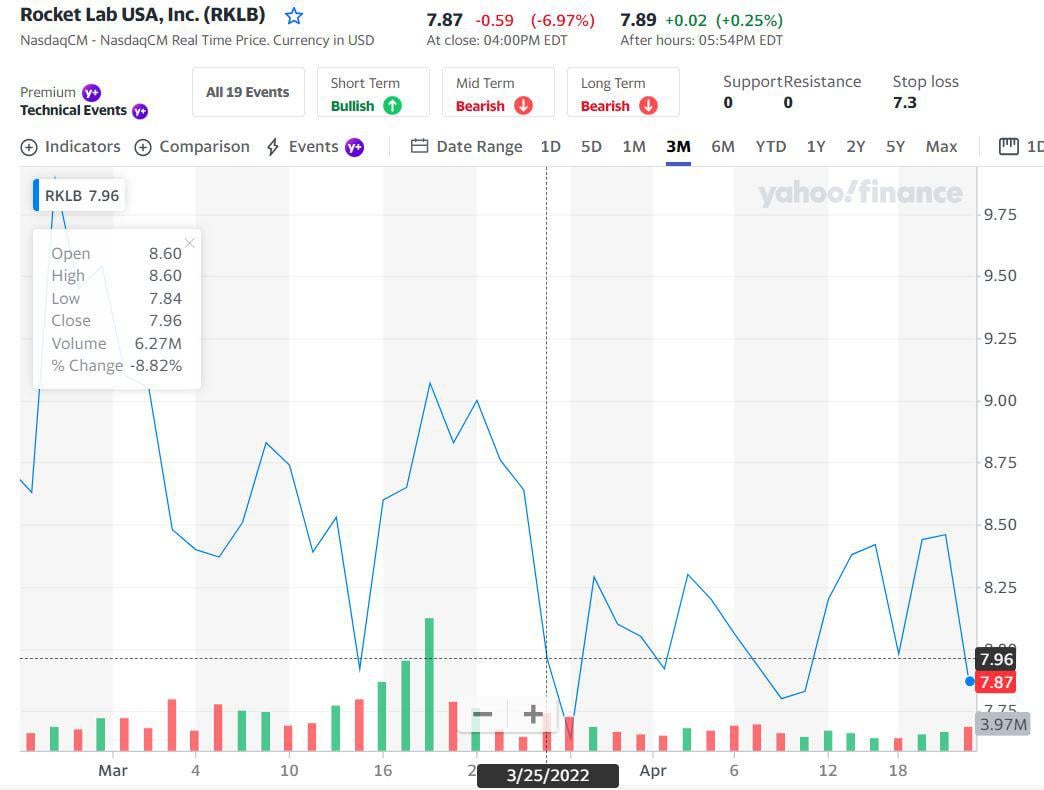 2) I estimate that perhaps as much as 50% of the shares held by the VC's are liquidated and that this has been bought by large banks / financial institutions whose analysts all believe the stock should be worth $18 / share on average.

Parts of the article:

In a major announcement for the company, Rocket Lab released news that it will attempt a mid-air helicopter recovery of the Electron vehicle's first stage in the next scheduled launch, later this month.

Currently, the company complements the Electron rocket with the Photon customizable orbital spacecraft. Looking forward, Rocket Lab is developing the Neutron rocket, a large-scale reusable launch system, which will be able to deploy a 13,000kg payload into low Earth orbit, or a 1,500kg payload into an orbital trajectory to Mars or Venus. During 2021, Rocket Lab was awarded a contract from the US Space Force, worth $24 million, to complete development of the Neutron's upper stage.

Building on its launch program, and to raise capital for its development program, Rocket Lab entered the public markets in August of last year. The stock's entry to the NASDAQ came through a business combination with a SPAC firm, Vector Acquisition Corporation, and brought the space launch company as much as $777 million in gross proceeds.

Since going public, Rocket Lab has reported fiscal results for three quarters, starting with 2Q21 last September. The company saw zero revenue in that quarter - but reported $5.3 million in 3Q21, which more than quintupled to $27.5 million in 4Q21. Full-year revenue for 2021 came in at $62.2 million, up 77% year-over-year.

Kristine Liwag, Morgan Stanley's resident expert on the Aerospace & Defense sector, sees the upcoming helicopter retrieval attempt as the key catalyst for Rocket Lab, writing: “We view RKLB's upcoming mid-air booster retrieval attempt as a potential near-term catalyst as a successful operation would reflect a key milestone as the company executes on its strategy to increase rocket reusability (and thus lower cost).”

Going on, Liwag points out how this retrieval capability will set Rocket Lab apart from its peers: “We view the company's ongoing and planned innovations in rocket reusability enabling Rocket Lab to potentially further widen the moat between itself and competitors... These innovations could enable recovery of ~70-80% of each rocket's economic value, allowing Rocket Lab to potentially further drive down vehicle costs and insulate itself from potential pricing pressures engendered by rival small launch offerings and rideshare services.”

In line with her comments, Liwag rates Rocket Lab shares an Overweight (i.e. Buy), with a $17 price target to imply a robust 109% upside for the stock. (To watch Liwag's track record, click here)

Overall, with 6 recent Buy ratings overpowering a single Hold, Rocket Lab gets a Strong Buy from the analyst consensus. The shares are priced at $8.11, and their $18.86 average target suggests ~133% upside from that level.

3) Why do I think the institutions are buying? Because Rocket Lab has bought back all their outstanding SPAC warrants reducing the risk to traditional larger investors moving in.

Excerpt from the article:

LONG BEACH, Calif.--(BUSINESS WIRE)--Rocket Lab USA, Inc. (Nasdaq: RKLB) (the “Company” or “Rocket Lab”) today announced that it will redeem all of its outstanding public warrants (the “Public Warrants”) to purchase shares of the Company's common stock that were issued under the Warrant Agreement, dated as of September 24, 2020, by and among Rocket Lab USA, Inc.

4) Mix that in with some really good acquisitions, and I think this is the catalyst that RL needs to more than double in price. These include satellite electronics, satellite solar power generation, satellite mechanisms and separation systems. They have diversified as well and now are winning satellite construction contracts outside of just their launch business:

The acquisition is the third that Rocket Lab has announced this year as it seeks to expand beyond its core business of launch vehicles. The company purchased spaceflight software provider Advanced Solutions Inc (ASI) in October, and spacecraft separation systems firm Planetary Systems Corporation in early December.

Successful Stage 1 ocean recovery showing they can get the stage under chute and down to the water:

In short, I think this is a great buy. Worst case, this recovery attempt doesn't succeed, and they keep trying till it does.

TDLR - Buy Rocket Lab if you think reusability of the rocket = $$ like I do. The stock is held down and will moon if they catch the stage during the next launch in the next few days. Worst case, they catch it on a future flight.

Not Financial Advice. I am just a clown like all of you who has worked in “space” for 20 years.

My position: more than 300k commons.