If you're lucky, you read and acted on my Ternium DD from June 17th - for those 5 people who did, congrats on being up 5-8X on your calls.

Not taking credit or anything, but c'mon, that's pretty great timing.

Ternium and SID are two very different companies, but the play is fundamentally similar. In the wake of Ternium's run up, SID is now the most undervalued steel producer in the Americas.

SID is a major supplier of flat steel products in Brazil and abroad. Formed as a state-owned enterprise in 1941, taxpayer dollars helped to balloon SID into the largest steel producer in the county. In 1993, the Brazilian government sold off 91% of its stake on the Rio Stock Exchange and released strategic control of the company.

Under fortunate leadership, in the latter half of the 1990's and early 2000's SID would leverage their profitability in steelmaking to acquire a veritable web of complementary businesses throughout Brazil and abroad. In a masterclass of vertical integration, SID:

Fast forward to 2021. Steel prices have tripled in the past year across high-margin finished products globally. In SID we have a company that literally owns or operates the power supply, the raw materials mining and refining, the pre-finished casting product production, the finished steel production, the transportation network, the distribution and sales network, and a fucking port. And they're trading at a 3.06 Price to Earnings ratio, at the HIGHEST EV/EBITDA in the sector.

SID is the largest and most profitable steel producer in the largest South American economy. They will be a primary beneficiary of the billions to be spent on infrastructure investment as Brazil emerges from COVID and modernizes their built environment. What's more, the Brazilian and South American markets stand out in pricing resiliency. Steel prices have begun to wane in Europe due to lax automobile production, and there is speculation the US will follow thanks to talks of relaxing the TEA 232 Tariff protections. That is not the case in Brazil - prices are still rising.

SID is minting money. They are consistently profitable even in economic downturns thanks to their diversified revenue streams, but PRINT money in boom cycles thanks to their integration across the entire production, sales, and delivery lifecycle. Think I'm kidding?

Quarterly and TTM Net Income for SID. Even in global steel market busts like 2008-2015, SID turned a net profit.

When the steel market is hot, SID is a money machine. look at that graph: $3 Billion in net income over the past twelve months while currently sitting at a capitalization of less than $9 billion. For comparison, SID has a similar debt profile to Cleveland Cliffs (CLF), a major American flat steel producer and miner, but is trading at 1/4 the TTM Price to Earnings Ratio (3.0 to CLF's 13.00).

Iron ore, energy, and shipping costs have all risen alongside finished steel prices post-COVID. SID is the only Brazilian steelmaker that mines it's entire iron ore needs, and actually made more money in 2020 from selling ore to competitors than they did from selling steel. SID's footprint in mining and transport enabled them to shrug off higher input and carry costs and realize record profits via strong end-market demand for both Steel and iron ore.

SID trades on slightly lower volume relative to the rest of the steel sector. Here are the rough 100-day Average Dollar-Volumes of their industry peers in the Americas:*

*These were calculated with 100 day average volumes from a DD back in June to save time. Volumes have not changed a whole lot across the sector, so they work for approximating overall trends, but are not exact or current.

Here we can see that SID trades at a lower volume than it's American peers, though not quite as low as it's Brazilian counterpart Gerdau (GGB), and definitely not as low as Ternium (TX).

However, SID has a huge thing going for it: Institutional Buy-in. 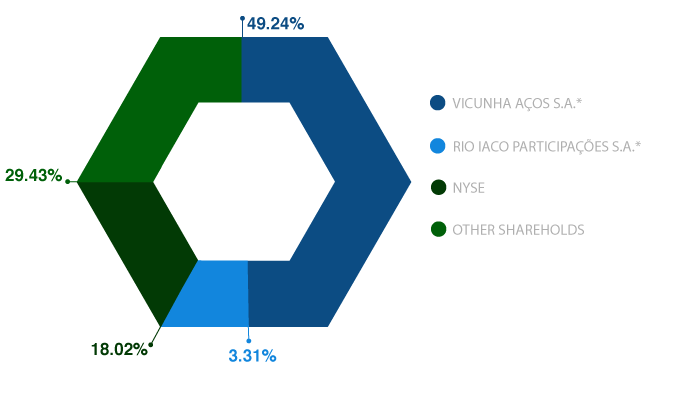 As a baseline, nearly 50% of SID's outstanding shares are retained by their parent/holding company Vicunha Acos S.A., alongside 7 million treasury shares.

18% (248,764,538) of SID's common stock trades on the NYSE as opposed to the Sao Paolo Exchange - Whale Wisdom reports that at the end of 2Q 2021, 40,000,000 of those NYSE shares were held by 13F reporters, up 7% from 1Q 2021. Additionally, the number of individual institutions reporting a position increased by 22%, and 41% of extant holders increased their position size. Twice as many 13F filers increased their positions as decreased them, and twice as many opened a position as closed one. All of this despite a 54% appreciation in share price over the first 20 trading days of Q2. The takeaway? Smart Money is still showing up to buy.

There are plenty. Steel prices could drop precipitously - Europe is already showing weakness after all. However, steel pricing is so elevated that even a decline following historic rates of change would see SID completely deleveraged before they leveled off. It is unlikely that finished steel pricing will ever settle at historic trading ranges ever again, thanks to industry-wide trends and changes discussed in my last DD.

Iron ore's price drop has also cut into their sales from mining, but hasn't yet impacted prices for flat steel in South America. SID seems to be trading in a basket with other Brazilian miners irrespective of it's steel and cement operations. Take a look: its 1 year chart is really a less volatile VALE chart with clearer Bull and Bear trends. This is either an opportunity for arbitrage as SID's earnings remain elevated above other miners thanks to their finished steel exposure, or a pattern that'll persist.

Brazil could also implode politically or economically. I'm not a political wiz, but I feel like Brazil is positioned better than some would think from the headlines. Covid has not really been a killer of the work force (deaths for those 20-59 years old fluctuate around 20% of the totals), and Brazils currency has been performing fantastically relative to the USD the past 6 months. The Reais enjoyed a 10% appreciation against the US dollar between April and July of 2021, and has stayed flat the past two months even against rumors of imminent US rate hikes. You can thank Brazil's relatively strong monetary policy for that consistency. Of course, Brazilian monetary policy could always take a turn towards too deflationary and risk stagnating the economic growth that's fueling SID right now.

You can read through SID's 2020 20-F to get a complete picture of their potential headwinds - their risk disclosure is conveniently placed on pages 4-18 near the beginning. You should really be reading this for every company you invest in, at least until you're familiar with what they say, as companies in similar markets/ regions/ industries usually disclose the same general suite of risks.

SID is the slept-on wunderkind of the global steel industry. They're not cutting edge or ESG friendly - they're a huge mining operation, and their massive primary steel plant runs on some of the oldest, nastiest tech in the game - but they make money.

SID's share price is down 30% from the $8.5-9.5 range it consolidated in for three whole months, likely sold off with Iron ore and the rest of Brazilian equities (see GGB, PBR, VALE) in reaction to Bolsonaro drama and COVID scares. Good news for them is that likely nothing is going to happen with Brazil's executive, and COVID has yet to slow down Brazil's steel industry during this 18 month saga.

I have recently re-opened a long position in SID. IV is low so I like calls, specifically near the money strikes ($6-7) for December and later. I'm anticipating some more weakness in share prices through OpEx and will leg in as I see opportunities.

Oh also, If you're a boomer on holiday in WSB, their dividend yield is somewhere around 7%. Definitely worse places to park your money than a cash cow cyclical in the midst of a boom.