While the gaming sector may have experienced a slow-down from the Covid tailwinds that propelled the industry for most of 2020, the sector still remains very hot. The demographic has also changed. What used to be predominantly consumed by teenage boys and males in their twenties has now expanded to a much broader, all-inclusive demographic. Studies show that although males still dominate this space, it is gaining rapid popularity among females and also those aged 40+.

Activision Blizzard (ActiBlizz) - About the company

Where does Activision Blizzard (ATVI) fit into all of this? ActiBlizz is one of the world's most renowned triple A game developers. The company is divided into 3 separate publishers that consist of various studios and intellectual property: Activision, Blizzard, and King. Here's where each of their IP fall under by publisher. 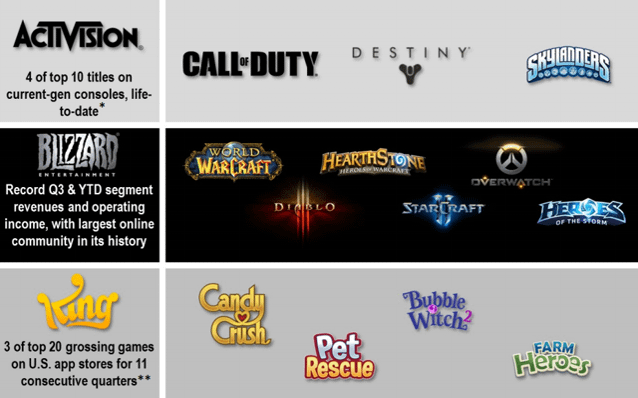 ActiBlizz's largest-grossing franchise is by far the Call of Duty IP, also known as CoD, that releases a new addition to the sequel every year in the fall. Coming in second is the King publisher with Candy Crush, and very close behind is the Blizzard segment that consists of games like World of Warcraft, Diablo, Hearthsone, Starcraft, etc. Here's a chart that displays the percentage of revenue from each publisher. Activision is by far the largest source of revenue producing nearly 50%. 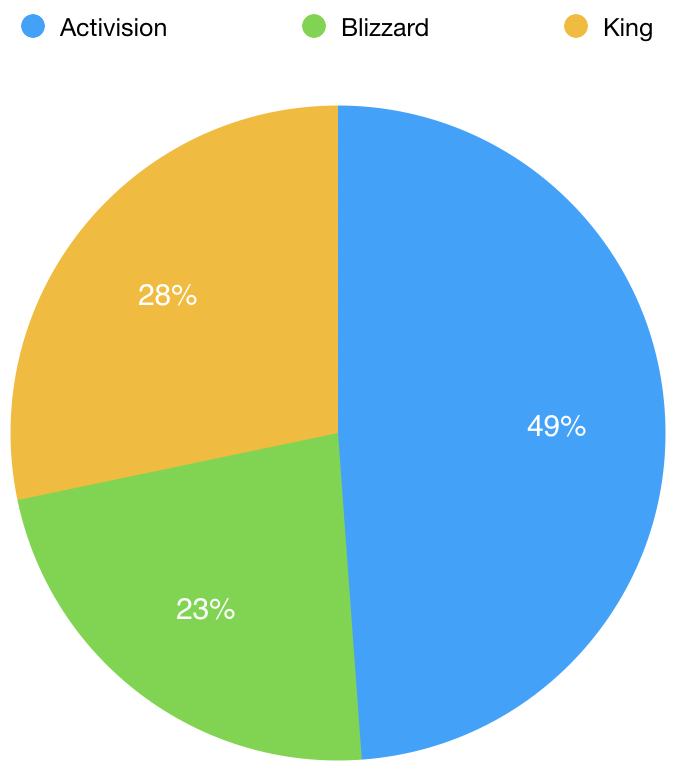 Let's look at the potential growth of the video game industry. A report by Cision, suggests that the video game market, which includes PC, console, and mobile gaming, will have an expected CAGR of 11% between 2021-2026. The total addressable market (TAM) of the gaming market, currently estimated at $175 billion, is forecasted to reach approximately 300 billion by 2027. Roughly half of this is attributed to mobile gaming, leaving the other half for PC and console.

It's not easy to put an exact number on ATVI's current market share in this industry. Based on their TTM revenues of roughly ~8.3 billion and a current market size of $175 billion we can make a broad assumption that ATVI currently holds a 5% market share of the entire gaming industry. If all things remain equal a 5% share of the estimated 300 billion in 2027 would equate to 15 billion in revenue for ATVI, almost double what they are currently bringing in.

The industry-wide data emphasizes mobile gaming market is out-pacing growth relative to PC and console. ATVI already owns the the most grossing mobile game of all time, Candy Crush, but they are also re-positioning themselves to take the lead into the advanced mobile gaming market. By advanced gaming market I am referring to games that aren't the type for playing five minutes here and there. These games are the grab-and-go versions of popular console/PC IP, such as CoD mobile and the up-and-coming Diablo: Immortal, a hack-and-slash for smartphones.

Activision hit it out of the park with CoD mobile and, as per their most recent earnings call, is on track to exceed $1 billion in consumer spending for the year. Remember this is a MOBILE game. On their recent earnings calls management commented on the strong growth in bookings:

“Call of Duty Mobile net bookings grew double digits year over year and sequentially, driven by strong execution in seasonal content in the West and the recent launch of the game in China”

ActiBlizz has successfully ported a CoD title to mobile and it is well-known that a Diablo title will be coming to mobile in early 2022. Management also recently hinted at a World of Warcraft (WoW) mobile title in the works.

“Two Warcraft mobile experiences are in various stages of internal testing, with the team looking forward to sharing more about these titles soon”

PC and console games will always remain a strong presence in the gaming industry, but as smartphones and tablets become increasingly powerful the door is wide open to take advantage of this growing market. ActiBlizz is well-positioned to dominate mobile gaming by introducing monetization tactics to capture freemium users (free to play, pay to buy premium in-game content) and transition them later on to their existing premium models on different consoles -creating a positive feedback loop. To do this, the company has been hiring talent and so far has added hundreds of developers to the roster even though they have lost a few of their top game designers (I will get into this later on).

“We have added hundreds of developers to the franchise over the last three years, and we continue to grow our teams as we prepare to launch three unique and complementary experiences across platform”

ATVI already has steady cash-flow from their on-going IP. Whether the latest CoD release has an average review of 9/10 or 6/10 it's safe to say they will sell millions of copies regardless. The same can be said for updates to the Hearthstone and WoW franchises, this is already known and priced in. I want to forecast revenues from the expansion of the Diablo segment by looking at recently released Diablo 2: Remastered (D2R) game for PC and console.

A quick history of the Diablo franchise. Back in the year 2000 Diablo II became one of the greatest games ever for that time period selling over 4 million copies as a PC-only game. Fourteen years later ActiBlizz released Diablo 3 for PC and console which ended up selling over 30 million (!) copies and becoming top 3 game in history, closely behind Minecraft in the number two spot, and PlayerUnknown Battleground as number one.

Circling back to D2R which was released last weekend (Sept 23, 2021). Let's look at a few trends for how anticipated this game was among the gaming community.

First, I want to look at the estimated site traffic of the most well-known Diablo community for in-game trading, d2jsp

Next, I'll look at Reddit's very own sub-reddit stats and look at the increase in subscribers and sub-reddit activity (comments) for the two most popular Diablo communities, r/Diablo and r/Diablo2.

Of course, just by the nature of a new Diablo release there will be increase chatter, searches, and trends around the internet. Although expected, it is very nice to see strong growth on all sides. It will be somewhat important to keep an eye on these trends a few months from now.

Guessing the exact numbers for Diablo 2: Remastered pre-orders and sales on opening weekend is not an easy feat. However, given that D3 sold over 30 million copies in 7 years I think we can expect strong numbers from D2R.

Looking into the 2022 release of Diablo mobile and the 2023 release of Diablo 4, Diablo 2 could not have been released at a more strategic time to get users back into the Diablo franchise. In my opinion this was a move to setup Diablo 4, coming out in 2023, for an absolute record-breaking release.

At $40 USD per copy of D2R sold here is some napkin math of estimating revenues based on units sold.

Let's make a conservative forecast that in it's lifetime D2R sells 10 million copies with 60% of the units being sold in the first year. 6 million copies sold this year would equate to 240 million in revenue for the Blizzard segment in the next twelve months which has done 1.906 billion in TTM revenues, a 12.6% increase in revenues for this segment. Considering the fact that D2R is mainly a re-skin of the popular game we might also see a slight expansion in margins.

ActiBlizz has been receiving a lot of bad press and questionable news headlines due to a few ongoing concerns with the company. The first is their recent 18 million dollar deal to settle sexual harassment lawsuits. From bad company reviews on various job boards to losing a lot of senior game designers, the work-place culture has been receiving an extremely bad rap. As much as I hate to see a company making headlines for these reasons, I would have to side on the fact that the financial impact these headlines will have on the company is going to be relatively muted.

Tied to what was mentioned above and the ongoing concerns of the company's culture was another headline making the rounds. ActiBlizz's CEO, Bobby Kotick, has recently cashed in on a 155 million compensation package. His compensation was mainly tied to the performance of ATVI's share price, which saw a huge organic boost caused by Covid.

Lastly, China's recent crackdown on young gamers limits youth to gaming only 3 hours per week. Exactly how this will be enforced by the nation and the impact it will have on the Chinese video gaming market is still unknown.

I always take analyst targets with a grain of salt, but looking at all coverage and upgrades in 2021 almost every single analyst covering ATVI has a price target above $110. These upgrades came in earlier in the year when the stock was over $90 per share. Most of the current price targets propose 50% upside to be seen.

If you need further confirmation from the tailwinds ATVI has experienced from the start of covid here's a breakdown revenues over the last several years.

The company also has a very strong balance sheet sitting on 8.6 billion in cash, and cash equivalents. This provides huge amounts of leverage for potential acquisitions of smaller IP to even further expand their empire or develop new IP with comprehensive story-lines, media, and digital assets.

When we compare ATVI to one of their biggest competitors, Take-Two Interactive (TTWO), they are pound-for-pound trading at similar valuations with similar metrics (although ATVI does nearly 3x the sales). ATVI's addressable market will continue to expand with tailwinds effecting the entire gaming industry and they have positioned themselves well to continue dominating the industry. Over the last three months ATVI's share price has seen a 20% decline from $95 to now $79 per share. Trading at a P/E of 23 it is my opinion that given the strength of their pipeline ATVI is under-valued here with downside being limited.