This post is not to meant to be controversial. I am not here to discuss your feelings and opinions. This is simply to walk you through what investors in DWAC/TMTG are betting on if you're interested in learning about it. I am not here to convince you of anything. This DD is simply to give you insight into the value proposition that holders of DWAC are basing their investment off of. I am simply going to go by the math and logic as it compares to the risk and reward. It's going to make this post a lot less exciting to the readers who are looking for the typical hype and WSB lingo, which is disappointing but it can't be avoided given the nature surrounding this topic.

Trump Media and Technology Group (TMTG) is a company aimed at

There is also an agreement with Rumble (32m+) users for a youtube alternative and hosting services for Truthsocial etc. and it is speculated there may be other aspects of the company.

$DWAC is in a definitive merger agreement with TMTG to take it public. After the merger is complete DWAC shares will be worth roughly 37.21 M / 193.4M (shares post merger) ~19.2% (dilution factor of about 5.2 or around 80.8% dilution) of the company. This means currently at $54.24 a share the current marketcap is priced in at 10.5B . Shares will automatically be converted to the stock ticker symbol $TMTG. 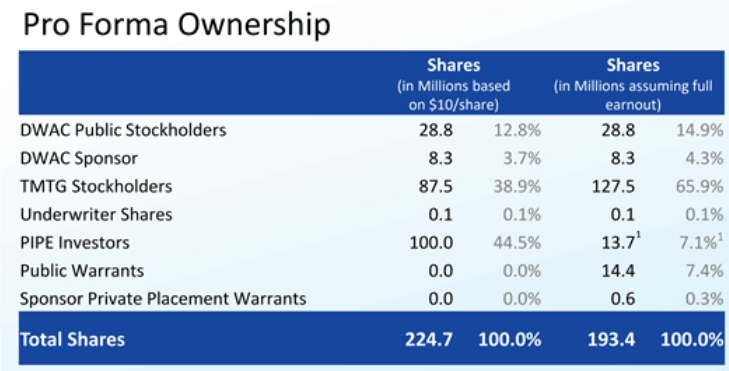 Compared to its competitors DWAC has massive upside potential. For starters, TWTR IPO'd with zero profit for a marketcap, adjusted for inflation, of 30-40B . From our math from before, this translates into a 3-4x the current share price of $54, $162-216 a share.

However social media is one small aspect of the business model. I'm going to make some conservative assumptions about what the userbase size will translate into for the different aspects of the company in terms of share price of the SPAC DWAC.

I'm going to start with TMTG+ streaming services since it's a much more simplistic model to users paying the company directly for its services.

Netflix has 271B marketcap compared to 214 Million Paid Subscribes. This translates to about $1266 in market cap per subscriber.

Let's say TMTG+ achieves only 10M subscribers with only $1000 per sub in marketcap . This alone would justify the current share price based off 10B marketcap.

Let's say TMTG+ achieves only 40M subscribers at only $1000 per sub in marketcap. This alone would justify a 4x increase in the share price based on a 40B marketcap.

Translating this aspect of the business you can roughly translate every 10M TMTG+ subs to an additional $55 in share price.

Lets say Truth social manages to do a much lousier $100/user in marketcap. This would mean 100M users would translate into 10B in marketcap. So for about 100M users you can add an additional $55 to the share price.

Let's talk about the news and webservices aspect of the business model.

AWS is responsible for about 64B in revenue of Amazon's 386B in revenue. AMZN has a marketcap of 1.74 Trillion dollars. Roughly speaking 16.5% of the marketcap (yeah I know margins etc.) is from AWS meaning AWS has a marketcap of something like 287B. Let's say TMTG pulls of 5% of this. That's an additional 14B in marketcap or about $79 a share. So for about every 5% of amazon's size in web services you can add $79 dollars to the share price.

Ok here's the growth projections from the corporate slide deck 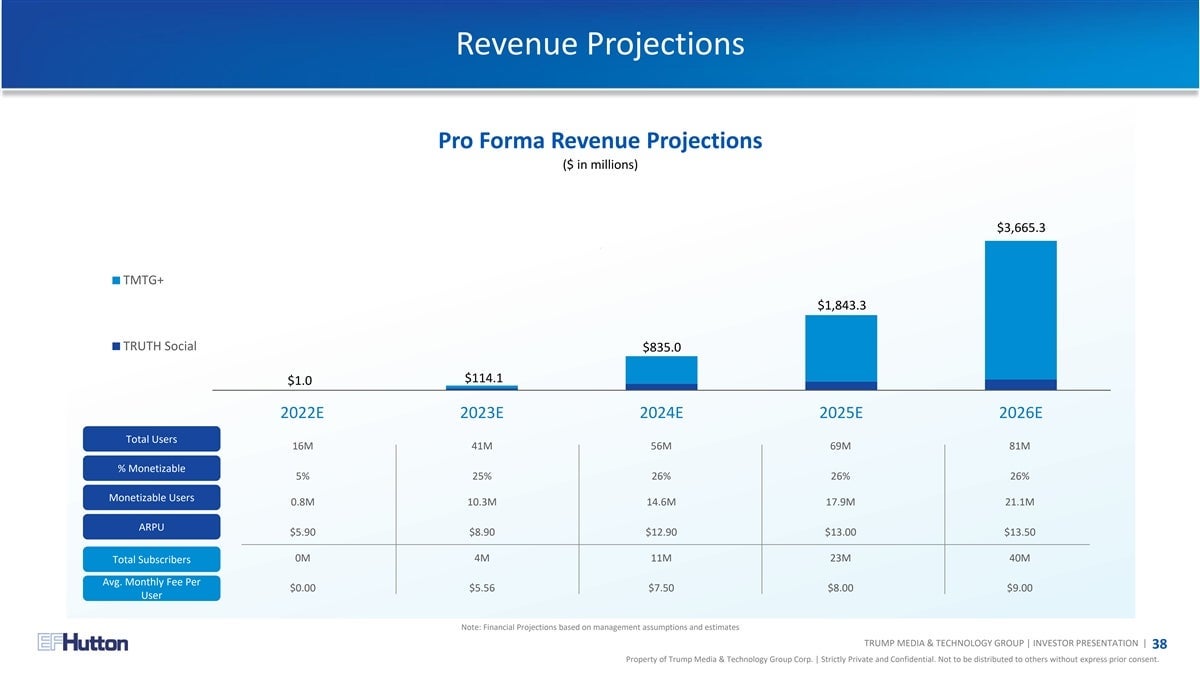 As you can see these numbers are pretty heavily understated to show what a slow growth and size scenario would look like. My suspicion is that this is deliberately understated, at least in time frames and definitively in social media users.

You can see this is a bit comical for what's being priced in for a someone who is as well known as DJT who had over 150M followers online and over 71M votes in his 2nd run for president. We've all seen the portfolio trackers and many others get banned off TWTR lately.

A total blow out of just one of the aspects

Imagine in these scenarios it will be trading for much more aggressive ratios so DWAC 1000 with much additional upside after on fundamentals is not a mathematical challenge.

I know many reading this will get very emotional both long and short and will look for any reason to make this sound bigger or smaller or impossible or dumb. There's also many people who do not want this to happen for their own personal benefits. So here's some common things that are said and a general counter to it.

FUD: "*The merger might fail or get blocked resulting in this going bad."*Counter: SPACs don't fail for the reasons described or eluded to by the outlets. u/independence_hall has a great post "The SEC and FINRA DO NOT have the legal authority or power to block the DWAC/TMTG merger" please see his post history and read it. He did the leg work and debunked this. It's almost a zero chance of happening.

Counter: There will be direct monetization outside of ads (see TMTG+ section) also Companies will have to go where people are advertising with their attention and dollars. It's easy for companies to dissociate from where their ads are located when the free market forces their hand. "Our ads are located in places that do not represent our beliefs as a company, we are solely interested in providing business to our customers despite their personal identities" " see it's not that hard to find work arounds for minor problems like this. Content creators will likely be supporting each other as well with a cut going to the host (much like Twitch, web3.0 etc.)

FUD: "Trump doesn't know what he's doing he can't even open email"Counter: Trump just got over a billion in PIPE funding (largest in SPAC history). There's plenty of well paid people with the right background on the company. Trump is largely here for traction, which is the primary issue all social media companies face.

There's also an agreement with Rumble to use their services and a rumor about Parler. You're welcome

FUD: "This will be GAB/Parler 2.0 failure"Counter: TMTG+ and the other services are nothing like the markets that these are in. Secondly Parler was becoming massively successful very quickly before it was pulled from the app store and AWS violated contract removing it. Parler is back now. TMTG is safe

Counter: Trump steaks and the other very few things like 'From the Desk' that were unsuccessful account for a very small percentage of his ventures. Those are also very different products in very different markets. Investigate this further if you still think it's relevant, you'll be surprised the actual facts and not what low effort FUDs would have you believe.

FUD: "Myself and other have moral/ethical dilemmas because of our ideology"Counter: I'm not here to argue with you to try to show you why everything is wrong, it's a simple observation that at minimum hundreds of millions of people disagree with you and there is a massive market for it and a demand.

FUD: "Open source" "Bad security" "Software licensing"Counter: Source is released and posted, security is fine. Android and Linux are OS as are many projects. There's billions in funding, tech people have already solved this issues for many other services. The issue is Traction. That's where Trump comes in.

I'll add a lot more to this since I'm sure there will be plenty more to come.

So since this thing is trading far below fundamental value, what gives? We'll discuss the short interest is at least something like 3M on a 28.7M float. Also that over a 1B shares have traded hands. If something like 3% of this is held by people who are not willing to sell, that means essentially the entire float is locked up until we see higher prices. I have some conjecture in my post history talking about how there is probably more holders than there are shares because of naked selling and synthetics etc. Also the cost to borrow rate is up to 88%, this is quite high when you consider last time GME hit these level the MOASS happened. A lot of shorting took place in late Oct so FTDs are surely past due? Utilization is already at 100% so short sellers look to be in trouble. I suspect many of them shorted based on ideology and not fundamentals.

I have shares, warrants, and calls and I believe the beta-launch or full launch may cause a massive surge in price expectations once hard data rolls in, if not then by the time the revenue rolls in. The risks are often nonsensical or overstated by people with strong opposing political ideology and lack of financial and technological understandings.