Why $CLNE will run the rest of the month

Why $CLNE will run the rest of the month

As we all know, CLNE has been trading flatter for the better portion of a month now. However, I think that is all about to change. Also, I think it has actually been a good thing that the flatness has been getting tighter and tighter each day (seriously, CLNE moved like 5 cents back and forth today). Before I get into why it's about to run, here's some background on why CLNE is an amazing company (especially at $9).

WHAT DOES CLNE DO?:

Clean Energy Fuels (CLNE) is in the business of creating Renewable Natural Gas out of organic waste. Renewable Natural Gas is one of the best bridges to move into green energy. EV's, Hydrogen, Solar, all are not prepared to power the worlds trucking fleets, despite their claims. They are in fact years away. It is exponentially cheaper to convert a long haul trucking rig to natural gas than to buy an EV rig. If you're an average trucker, your truck is where pretty much all your money and value is stored. It would be bonkers to buy a new EV vs to spend the $20,000 to convert your current rig to Nat gas.

Clean Energy Fuels already fuels more than 250,000 vehicles with RNG daily. This isn't some start up or nonsense gravity truck firm (looking at you NKLA). They have over 570 stations across North America already. CLNE is fervently building new stations at a breakneck pace. What that really amounts to is a substantial lead over any competitor. Which really means that you'd have to either use them or buy them out to try outpace them at their current rate.

Renewable Natural Gas is good for the planet also (I know this is a stock presentation, what is the environment, but hold on). The current administration in the USA, and honestly the next ones too if they want the youth vote, are highly motivate to shift to green solutions. But they have to deal with the people who will drag their feet and won't want to spend millions on all new green solutions. RNG is the perfect bridge between the two. You can convert your trucks, your mail delivery fleet, whatever, all to RNG much cheaper than buying a new one. Renewable Natural Gas reduces carbon emissions, especially on big trucks) by a minimum of 70%. CLNE is committed to reducing that to 0 by 2025. This makes it highly likely to be chosen as a green solution. Methane is 20% of greenhouse gas emissions, so it's a double whammy, stopping two sources of pollution.

Finally, CLNE already has contracts with big companies. The ever so touted Amazon contract is one of them. UPS already has a contract with them. They are the largest provider in California’s Low Carbon Fuel Standard program. People are coming aboard before they're forced to convert a much higher price (California especially is stopping a lot of non green shipping, but that's a whole other rabbit hole). There has been institutional buying of the stock over the past month and before, as these prices are a steal. WAIT WASN'T THERE A BIG SELL OFF EARLIER OMFG? That was Total taking a profit on their shares they bought for next to nothing years ago. It has already been announced over the twitter that they have stopped, as they just wanted to make sure they got a return on investment.

WHY IS IT GONNA RUN?:

First, the technical. Now I am not the Adeptus Mechanicus, but apparently technical do something so I'll lay some out with my moronic knowledge. 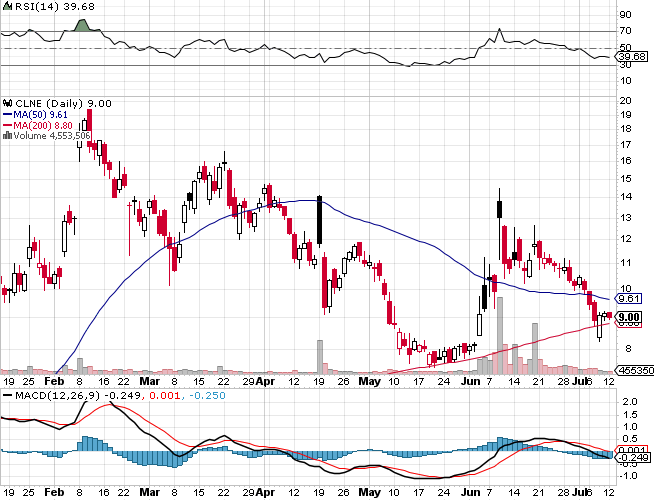 Just for fun, here's today. There's a little cup and handle there, I think.

Now, over 6 months, something interesting comes out (yes I took this from Google, not all of us are billionaires who buy fancy crayon software): 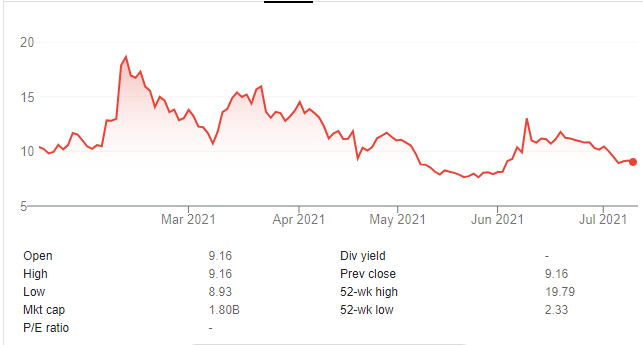 There seems to be a cup and handle growing here too. It is also following a similar drop and spike pattern as from May to June, suggesting another upward jump coming.

CLNE has consistently bounced off the 200 SMA, which suggests that that will stay a strong support. So $9 is a pretty safe entry point to buy some long dated options at, and a downright boomer safe entry point if you're buying shares. Over the last 6 months, we've stayed trading above $8, and really actually $8.50. With CLNE consistently growing, I don't see why we would drop past there.

But in reality, I don't speak stock robot, so technical aren't really my thing. Just my thoughts on the techs.

There is a large amount of near the money options open on CLNE (someone once told me this doesn't matter because there's not as many as GE or Amazon. If you say something silly like that, you belong in the poorhouse).

Now here is where there becomes two routes for CLNE to run. The first is that CLNE starts to rally as it did near the June option expiry. This sent CLNE to a spike of $14.60 ish. If CLNE gains the interest of an institution looking to start getting foolish or becomes back in favor to fickle fools, then CLNE would already jump past where we we've been holding for weeks and your investment would already be profitable, or it would set up to become more profitable in the real run to come for July. Expiring option dates have generally been good to CLNE based on past performance.

The more realistic route is that the options all expire OTM. This seems bad (and indeed is for those option holders) but would actually still be good for CLNE. After we are finally away from an option expiry, CLNE can begin its run to August earnings. It has been announced that there will be a conference call immediately following the earnings report. Now, Clean Energy Fuels usually likes to wait to announce big deals for their earnings. They got very close with their Amazon deal to the May earnings call (15 ish days). That sent CLNE jumping up to the near 20's price. I think there is a high level of anticipation for this earnings call. While I personally believe a new contract will be announced (I think new, expanded UPS deal, but that's pure speculation so is not necessarily relevant in a DD, besides that is SEEMS like it'll happen haha), I think the belief of institutions and the average buyer that CLNE wants to announce a deal will cause CLNE to run up until earnings. CLNE already has received interest as a top trending stock on reddit, among other places, and the CEO went on Cramer and roused some interest there. There is also a suspicion that there might be more to the Amazon deal, as he stated that he couldn't go much more into it, as Amazon wanted to talk more about it. So, I think the belief of an Amazon deal or belief of a new contract will fuel CLNE to run until earnings. After earnings is anybody's guess, especially depending on the conference call. However, it is an easy run up to earnings, as I think most people (including analysts below) expect it to be pretty great. Also, with the temptation of a new contract, it will double the general excitement leading up to earnings.

Earnings will also most likely be good. Most people panic at CLNE's past earnings with just a glance, but they almost always are 0.00 because they reinvest every penny into building more RNG stations, just furthering their lead in the sector. So even if CLNE holds on to 0.01 for the quarter, it will be gangbusters in terms of their earnings, which makes it very easy for CLNE to smash earnings. 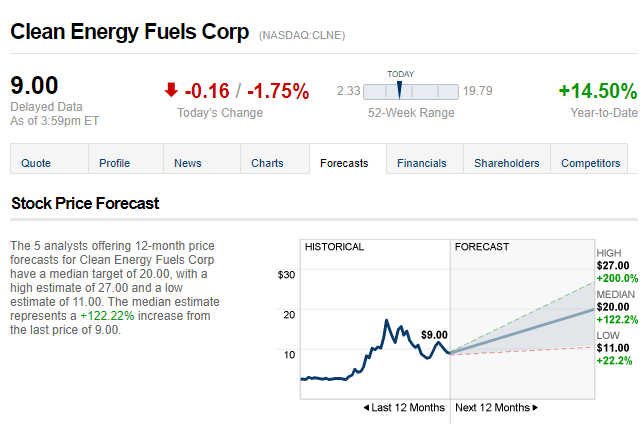 Analysts have high projections for CLNE for the next 12 months.

Even the lowest is $2 above close, and the median is $20. There is clear real belief in the stock. Most analysts put it at a "buy" rating, because it is criminally undervalued.

TL;DR: CLNE will have a a gangbusters run up to earnings after 7/16 options expire (or an even higher climb if they somehow expire ITM) due to sentiment and belief that CLNE will announce new contracts/have an even okay earnings report. CLNE is also an extremely safe bet at these levels as it has consistently held them. Personal price target: $18 the day before August 5th earnings.